The Chicago Cubs will host the Milwaukee Brewers in an NL Central Showdown on Sunday afternoon. It will be the finale of a three-game set at Wrigley Fields.

Chicago’s four game win streak was snapped on Saturday, after falling 4-3 to the Brewers. The pitching staff combined to strike out 12 batters in the game. From the dish, they had 8 hits but were just 1-8 with runners in scoring position. Jason Heyward hit a solo shot in the 8th, his second of the season. To start the year, the Cubs have a .216 team batting average and .719 OPS. Javier Baez leads the team with 6 home runs and 17 RBI.

The Brewers won for the 4th time in 5 games after their win on Saturday. Brent Suter got the win after tossing 2 scoreless innings in relief of Freddy Peralta. From the dish, they had 7 hits but were 0-9 with runners in scoring position. Manny Pina hit a pinch-hit two run shot in the 7th innings, his 2nd of the season. Milwaukee has a .209 team batting average and .664 OPS. Omar Narvaez leads the team with a .373 average, 1.019 OPS and 3 home runs.

Righty Brandon Woodruff will get the start for the Brewers on Sunday. He is 1-0 with a 1.96 ERA, 0.74 WHIP and 26 strikeouts to start the season. The Brewers are 1-1 in his two starts against the Cubs this season.

Milwaukee has been great on the road this year, and the same goes for their starter Brandon Woodruff. Last time he pitched in Chicago, he tossed 7 shutout innings with 8 strikeouts. However, the Cubs have been much better from the plate over the last week, leading the majors with a .284 average and 45 runs scored. Milwaukee’s bullpen has been inconsistent, so even if Woodruff pitches well, the Cubs have a shot to come back late. I will take a chance on the home dogs. Give me Chicago to win. 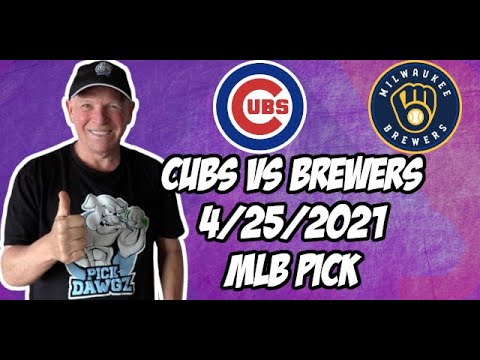