The St. Louis Cardinals will host the Cincinnati Reds in an NL Central battle on Sunday afternoon. It will be the finale of a three-game set at Busch Stadium.

The Cardinals have taken the first two in this series after a 2-0 win on Saturday. John Gant had his best outing of the season, tossing 6 shutout innings with 5 strikeouts. From the dish they had 7 hits and were 1-8 with runners in scoring position. To start the season, the Cardinals have a .223 team batting average and .691 OPS. Yadier Molina leads the team with a .339 average, 1.044 OPS, 5 home runs and 14 RBI.

Starting for the Cardinals on Sunday will be righty Jack Flaherty. To start the season, he is 3-0 with a 3.80 ERA, 1.13 WHIP and 21 strikeouts. In his career against this Reds lineup, he has allowed a .245 average with 19 strikeouts in 77 at bats.

The Reds have now dropped six straight after their 2-0 loss on Saturday. Wade Miley pitched well but earned the loss, going 6 innings and allowing 2 runs. From the dish they managed just three hits and were 0-2 with runners in scoring position. To start the year, the Reds have a .254 team batting average and .787 OPS. Jesse Winker leads the team with a .373 average and 1.058 OPS.

Getting the start for the Reds on Sunday will be righty Luis Castillo. To start the year, he is 1-1 with a 6.05 ERA, 1.66 WHIP and 16 strikeouts. In his career against this Cardinals lineup, he has allowed a .318 average with 38 strikeouts in 147 at bats.

These two pitchers faced off early in the season, and the Cardinals came away with an 11-6 win. Both pitchers were hit hard in the game, but I expect this one to go differently. Flaherty has been the better pitcher since then, and the Reds have been struggling from the plate in this series. Give me St. Louis to win. 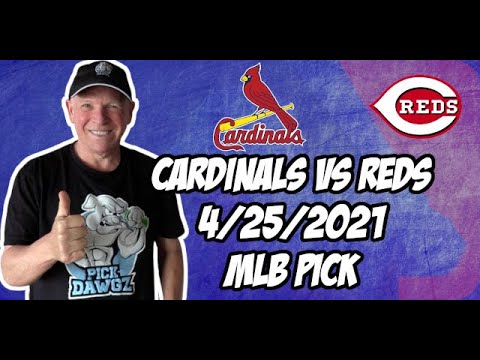