The Colorado Rockies will host the Philadelphia Phillies in an NL matchup on Saturday night. This will be the second of a three-game set at Coors Field.

The Rockies came back to win the first game 5-4. Raimel Tapia hit a walk-off home run, his 3rd home run of the season. The pitching staff combined to throw 11 strikeouts in the win. From the dish, they had 11 hits and went deep 4 times. To start the year, Colorado has a .232 team batting average and .692 OPS. Ryan McMahon leads the team with 6 home runs and 11 RBI.

Getting the start for Colorado on Saturday will be righty Antonio Senzatela. He is 1-3 with a 5.40 ERA, 1.40 WHIP and 11 strikeouts. Against this Phillies lineup in his career, he has allowed a .289 average with 4 strikeouts in 40 at bats.

The Phillies lost their 3rd game in 4 tries after Friday nights defeat. From the mound they combined for 11 strikeouts in the loss. The offense combined for 11 hits but were 0-10 with runners in scoring position. Rhys Hoskins hit his 4th home run of the season, a solo shot in the 7th. To start the year, Philadelphia has a .245 team batting average and .710 OPS. Bryce Harper leads the team with a .333 average, 1.057 OPS and 4 home runs.

Starting for the Phillies in this one will be righty Aaron Nola. To start the year, he is 1-1 with a 2.19 ERA, 0.97 WHIP and 28 strikeouts. Nola has allowed a .244 average with 17 strikeouts in his career against this Rockies lineup.

The Phillies will be looking for redemption after they blew a 1 run lead late in Friday’s game. They will have a good shot with their Ace Aaron Nola on the mound. He has been great to start the year and will face a Rockies lineup that has struggled against right-handed pitching. Senzatela is young and talented, but not consistent enough to back against this potent Phillies lineup. Give me Philadelphia to win. 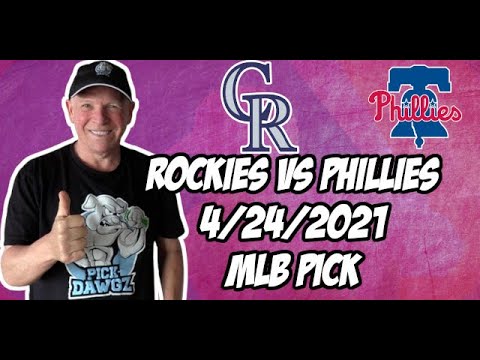