Where to Watch: ATSW, BSW Stream the MLB Game of the Day all season on ESPN+. Sign up now!

The Los Angeles Angels need a win after losing four of their last five games. The Angels have scored 10 runs in their last three games and four or more runs in five of their last six games. The Angels have won eight of their last 11 games when scoring four or more runs. Mike Trout leads the Angels with 22 hits and 12 RBI while David Fletcher and Shohei Ohtani have combined for 37 hits and 20 RBI. Griffin Canning gets the ball, and he is 1-1 with a 5.68 ERA and 14 strikeouts this season. Canning is 0-0 with a 6.35 ERA and 11 strikeouts in his career against the Astros.

The Houston Astros look for a win after splitting their last six games. The Astros have scored 16 runs in their last three games and four or more runs in four of their last eight games. The Astros are 8-3 this season when scoring four or more runs. Yuli Gurriel leads the Astros with 22 hits and 11 RBI while Carlos Correa and Michael Brantley have combined for 39 hits and 14 RBI. Jake Odorizzi gets the ball, and he is 0-2 with a 10.57 ERA and 11 strikeouts this season. Odorizzi is 1-3 with a 5.05 ERA and 29 strikeouts in his career against the Angels.

The Houston Astros should be favored at home, especially after winning last night in extra innings to get a much needed shot in the arm. With that said, both of these offenses are starting to pick up and neither of these starting pitchers have looked good up to this point. This game feels like there's going to be a lot of fireworks. I'll play a rare total and take the over. 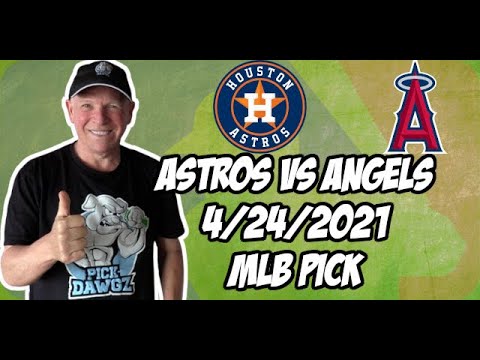