Where to Watch: BS Sun Stream the MLB Game of the Day all season on ESPN+. Sign up now!

The Toronto Blue Jays and Tampa Bay Rays face off on Friday in an American League East showdown at Tropicana FIeld.

Coming into the eason the expectations were high, but so far it’s been mostly disappointing as they sit with an 8-10 record overall. Even with the struggles the Blue Jays are coming off a big win in their last game against a very good Red Sox team. Bo Bichette has been the best player for the Blue Jays hitting five home runs and driving in 12 RBI’s. Vlad Guerrero Jr has also had a big season hitting four home runs and driving in 12 RBI’s.

On the other side of this matchup is the Rays who sit with a 10-9 record overall and they are playing some really good baseball heading into this game having success against the Yankees and the Royals. Joey Wendle has been the best player for the Rays hitting three home runs and driving in 15 RBI’s. Four different players have hit at least three home runs.

Steven Matz is going to get the start for the Blue Jays and on the season he has thrown 19.1 innings giving up nine hits and three runs.

Tyler Glasnow is going to get the start for the Rays and on the season he has gone 24.2 innings giving up only nine hits and two runs.

Both of these teams are going to struggle to score in this game and that is going to lead to a lower scoring game. Back the under to cash with ease in this game.In terms of the side the Rays are a good play on the run line. 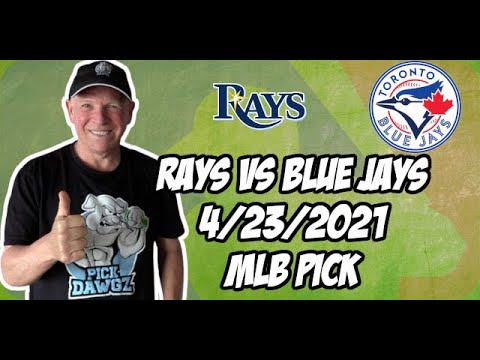