The San Diego Padres face the Los Angeles Dodgers on Friday, April 24th at Dodger Stadium for game two of a four-game series.

The San Diego Padres defeated the Los Angeles Dodgers by the final score of 3-2 on Thursday night in game one of this series. The Padres held a 2-0 lead until the 7th inning, as they allowed two solo home runs to A.J. Pollock and Sheldon Neuse in back-to-back fashion. San Diego would score a run on an RBI fielder's choice in the 8th and that run was good enough for the winning run in the end. Mark Melancon earned the save for San Diego and the Padres earned their second win of the year over their fiercest rivals in the NL West. The Padres are 11-10 on the year and the Dodgers are now 14-5 and have lost three of their last four games overall.

The San Diego Padres are projected to bring their ace in Yu Darvish to the mound to take on the Dodgers on Friday evening. Darvish is 1-1 with a 2.55 ERA through his first 24.2 innings of the season with the Padres. Darvish just faced this Dodgers team on allowed only one earned run in 7.0 strong innings in that one. Darvish did earn the loss as the Padres lost that game 2-0, but Darvish has still been excellent in every start except his Opening Day start nonetheless.

The Los Angeles Dodgers are set to send the left-hander Clayton Kershaw to the bump for game two of this series. Kershaw is 3-1 with a 2.19 ERA through his first 24.2 innings of the season. Kershaw has been incredible this season and his low ERA and WHIP represent that. Kershaw faced off against Darvish in that 2-0 Dodger win and he was electric in 6.0 strong innings, striking out eight.

I am going to take a shot with the road dog in the Padres here. Darvish and Kershaw were both fantastic against their respective teams in the first meeting, and I honestly price this game at a coin flip as well. Because of that, I think we are getting some value with the Padres as this line is not a coin flip kind of line. 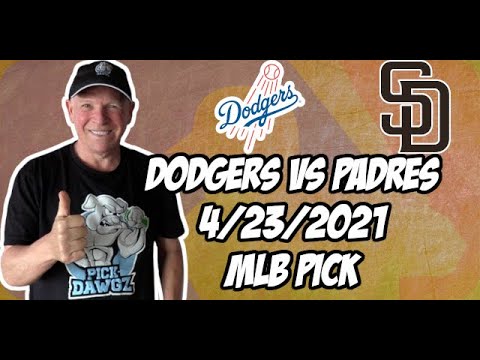