The Baltimore Orioles will host the Oakland Athletics in an AL showdown on Friday night. It will be the first game of a three-game set at Camden Yards.

It took a little luck for the A’s to win their 11th straight game. A couple errors in the 10th from the Twins helped to continue their rally, ultimately ending in a 13-12 victory at home. They A’s had 13 hits in the contest, and were 5-12 with runners in scoring position. Matt Olsen homered twice in the game. To start the year, the Athletics have a .222 team batting average and .718 OPS. Matt Olson leads the team with 6 home runs, 15 RBI and a 1.078 OPS.

Lefty Cole Irvin will get the start for the A’s on Friday. To start the season, he is 1-2 with a 4.60 ERA, 1.15 WHIP and 11 strikeouts. It will be the first time in his career he has faced this Orioles lineup.

Baltimore split their 2-game stint with the Marlins, losing their last game 3-0 at Miami. Bruce Zimmerman earned the loss after giving up 3 runs in 4.2 innings. From the dish, the Orioles managed just 4 hits and were 0-4 with runners in scoring position. In 2021, Baltimore has a .218 team batting average and .639 OPS. Cedric Mullins leads the team with a .328 average and .870 OPS.

I don’t see any reason to go against the streaking A’s in this one. The Orioles have not been scoring a lot of runs, and their numbers against left-handed pitching are middle of the pack. Pablo Lopez has struggled this season, and the Orioles have just been bad at home. Give me Oakland to win. 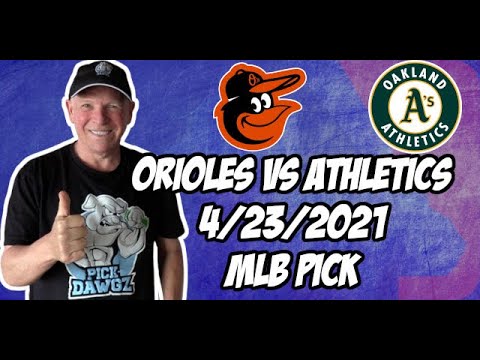