The Miami Marlins face the San Francisco Giants on Friday, April 23rd at Oracle Park for game two of a four-game series.

The San Francisco Giants defeated the Miami Marlins by the final score of 3-0 on Thursday night. The Giants have tossed three shutouts in their last five games, as their pitching staff has been on fire recently. The Giants allowed two base hits and walked one single batter in what was a dominant performance by Aaron Sanchez and company. The Marlins have now been shutout twice in their last four games and both of those shutouts were to the Giants. The Marlins are 8-10 on the year, which puts the team in a tie for third and fourth place with the Braves in the NL East standings. The Giants are 12-7 and are in second place in the NL West standings, only a few games behind the Los Angeles Dodgers for first place in the division.

The Miami Marlins are projected to bring right-hander Sandy Alcantara to the mound to face the Giants. Alcantara is 0-1 with a 3.28 ERA through his first 24.2 innings of the season with the Marlins. After a phenomenal start to the year, Alcantara has struggled a bit as of late. Alcantara allowed four earned runs through 6.1 innings of work against these Giants in his last outing on April 17th.

The San Francisco Giants are set to send left-hander Alex Wood to the bump for the second game of this series. Wood is set to make his second start of the year after he made his season debut with the Giants on April 18th against these Marlins. Wood was fantastic in that start, allowing only three hits and no runs through 5.0 innings while also striking out four batters. Wood did not allow a single walk either, and he will look to repeat that performance here.

I am going to take the Marlins here in a bounce-back spot. Alcantara has fantastic stuff and I think the second time he faces this Giants lineup he will find more success. Wood was excellent in his season debut but the distance he can go is still very short and I would not be surprised to see the Marlins hit him better on Friday than on the 18th. 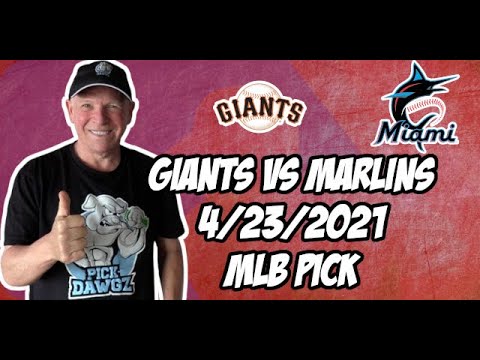