The San Diego Padres face the Los Angeles Dodgers on Thursday, April 22nd at Dodger Stadium for game one of a four-game series.

The San Diego Padres wrapped up their three-game series with the Brewers on Wednesday. Not only did the Padres lose the third game of the series, but they also lost the first two games as they were swept at home by Milwaukee. The Padres are now 10-10 on the year and only 5-8 at home. Luckily for San Diego, this game will be on the road and this series will be very important for a San Diego team that is underperforming early this season.

The Los Angeles Dodgers had the day off on Wednesday after splitting a two-game series with the Mariners earlier in the week. The Dodgers are the top team in baseball so far this season, which is not a surprise to most people. The Dodgers are 14-4 and are undefeated at home this season with a perfect 6-0 record. LAD will look to kick their rivals when they are down and add to this current Padres losing streak.

The San Diego Padres are projected to bring left-hander Ryan Weathers to the mound to face the Dodgers. Weathers is 1-0 with a 0.93 ERA through his first 9.2 innings of the season with the Padres. Weathers has been outstanding so far this season, as he has only allowed one earned run this season. Weathers has also earned 10 strikeouts and has only given up three hits.

The Los Angeles Dodgers are projected to send the young righty Walker Buehler to the bump for game one of this series. Buehler is 1-0 with a 2.00 ERA through his first 18.0 innings of the season with the Dodgers. Buehler has yet to have a bad start this season, but in his last start, he did allow seven hits to the Padres so he will look to lower that number on Wednesday.

With the current state the Padres are in, I do not see how they compete with Buehler and the Dodgers, at least in the first game of this series. Rather than taking a side, I think the strongest play is on the under, as I think both starters and bullpens will keep this game low scoring and tight. I will take the under here. 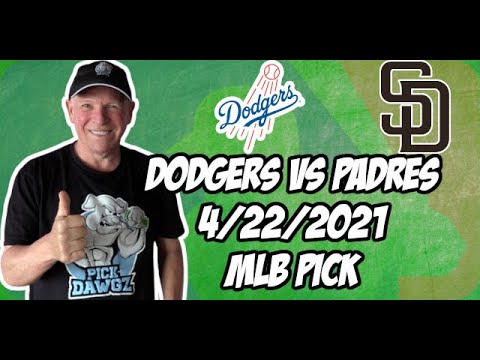