The Cleveland Indians will host the New York Yankees in an AL matchup this Thursday. It will be the first game of a four-game set at Progressive Field.

The Yankees lost their last game 4-1. Corey Kluber pitched 4.2 innings, allowing 2 runs with 2 strikeouts. From the dish their struggles continued. They had just 5 hits and were 1-3 with runner in scoring position. To start the season, the Yankees have a .205 team batting average and .630 OPS. DJ LeMahieu leads .277 batting average and 8 runs scored. Aaron Judge leads with 4 home runs and a .859 OPS.

Starting for the Yankees on Thursday will be righty Domingo German. To start the year he is 0-2 with a 9.00 ERA, 2.00 WHIP and 7 strikeouts. Last time he faced Cleveland was in 2019. He earned the loss after giving up 4 runs in 6 innings.

The Indians game on Wednesday was postponed due to snow. They lost the previous game 8-5 at home against the White Sox. They were beat by Rodon for the second straight game, but this time they managed to get a hit. Zach Plesac got the loss after giving up 6 runs in 5 innings. From the dish they had 7 hits and were 4-16 with runner in scoring position. To start the year, the Yankees have a .205 team batting average and .630 OPS. Franmil Reyes leads the team with a .273 average and 8 runs scored. Jordan Luplow leads with 5 home runs and 11 RBI.

Righty Aaron Civale will get the start for Cleveland on Thursday. He is 3-0 with a 2.18 ERA, 0.73 WHIP and 16 strikeouts to start the year. In his career against this Yankees lineup, he has allowed a .313 average with 2 strikeouts in 21 at bats.

The Yankees have not been producing the same type of power they did last season, as they rank in the bottom third in home runs to start the season. They also rank at or near the bottom in all other offensive categories. In this one they will face Aaron Civale, who has been off to a great start. Considering how inconsistent German has been for the Yankees, Cleveland should have the edge here. Until the big bats wake up in the Bronx, keep fadin’ the Yanks. Give me the Indians to win. 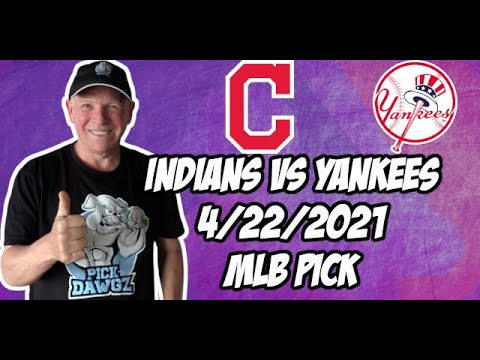