The Miami Marlins face the San Francisco Giants on Thursday, April 22nd at Oracle Park for game one of a four-game series.

The Miami Marlins defeated the Baltimore Orioles by the final score of 3-0 on Wednesday to split the two-game series. Trevor Rodgers was masterful and the Fish earned their 8th win of the season. Miami is now 8-9 in a very competitive and up-for-grabs NL East division. The Marlins have won three of their last five and will look for another series win over the Giants.

The San Francisco Giants were taken down in the final game of a three-game series by the Philadelphia Phillies on Wednesday. The final score of that game was 6-5 as the Phillies walked it off in the ninth inning to salvage the final game of the set. The Giants' three-game win streak was snapped with the loss, but they earned the series win nonetheless.

The Miami Marlins are projected to bring left-hander Daniel Castano to the mound to face the Giants. Castano is 0-0 with a 1.80 ERA through his first 5.0 innings of the season with the Marlins. Castano allowed three hits and one earned run in 5.0 innings of work in his season debut against the Giants on April 16th at loanDepot Park.

The San Francisco Giants are set to send right-hander Aaron Sanchez to the bump to take on the Marlins. Sanchez is 0-1 with a 2.45 ERA through his first 14.2 innings of the season with the Giants. Sanchez has been fantastic in his first few outings with the Giants this season and he will look to continue his hot start to the 2021 campaign. Sanchez just pitched against these Marlins, and he was able to pitch through 4.2 innings of the season while only allowing one earned run.

I am going to take the Giants in this one, as I think they are the better team with the stronger starter and bullpen in this matchup. The Marlins are pesky but the Giants seem to have a winning formula right now and although they took the loss on Wednesday, I think they come right back tomorrow and grab a victory. 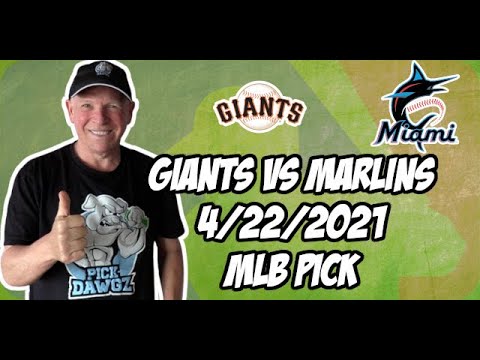