The Los Angeles Angels face the Houston Astros on Thursday, April 22nd at Minute Maid Park for game one of a four-game series.

The Los Angeles Angels ended their three-game series with the Texas Rangers with a loss on Wednesday. The Angels held a lead for a majority of the contest but blew that lead by allowing a three-run home run and a solo shot in the same inning late. The Angels scored four runs in the 7-4 loss, and all four of those runs were scored via solo home runs. The Angels are 9-7 with a 3-3 road record this season, which puts the Halos in third place in the AL West standings.

The Houston Astros took two losses in the elements at Coors Field this week. Wednesday's loss was a 6-3 decision in which the Astros had plenty of hard-hit balls, but not too many base hits. The Astros have the second-highest expected batting average in the league despite struggling at the dish this season, which means a Houston resurgence could be in store very soon. The Astros are currently in dead last in the division standings and own a 7-10 record.

The Los Angeles Angels are projected to bring right-hander Alex Cobb to the mound to face the Astros. Cobb is 1-0 with a 4.63 ERA through his first 11.2 innings with the Angels. Cobb has not been the sharpest so far this season but he does have a winning record, which is always a plus. Cobb is racking up the strikeouts early, as he already has 17 Ks in only 11.2 innings.

The Houston Astros are set to send right-hander Cristian Javie to the bump to take on the Angels in game one. Javier is 1-0 with a 2.08 ERA through his first 8.2 innings in 2021. Javier has 11 Ks in less than nine innings, which is very impressive. Javier has not conceded a single home run and has only surrendered two walks to his opponents as well, which are all great stats to see.

I think the Astros are due in a big way and I think this homestand with a division rival could be just what the doctor ordered. I am going to take the better starter and better lineup at home here with Houston. 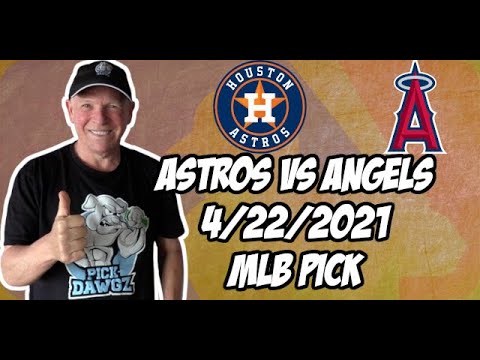