The Philadelphia Phillies will host the San Francisco Giants in an NL showdown on Wednesday. It will be the finale of a three-game set at Citizens Bank Park.

The Giants won 10-7 on Tuesday for their second straight in Philly. They were carried by the long ball in this one, hitting 5 home runs with Buster Posey hitting 2. They had a total of 11 hits in the game and were 2-4 with runners in scoring position. To start the season, the Giants have a .212 team batting average and .688 OPS. Evan Longoria leads the team with a .300 average, .975 OPS, 4 home runs and 9 RBI.

Starting for the Giants on Wednesday will be righty Anthony Desclafani. To start the season, he is 1-0 with a 1.06 ERA, 1.06 WHIP and 16 strikeouts. In his career against this Phillies lineup, he has allowed a .163 batting average with 15 strikeouts in 68 at bats.

Philadelphia lost for the third time in four games on Tuesday. Connor Brogdon earned the loss after giving up 6 runs in 0.2 innings of relief work. From the dish they had 9 hits and 3 home runs. To start the season, the Phillies have a .236 team batting average and .687 OPS. Bryce Harper leads the team with 3 home runs and a 1.030 OPS. Jean Segura leads with a .345 average.

Getting the start for the Phillies on Wednesday will be righty Zach Eflin. To start the year, he is 1-0 with a 3.15 ERA, 0.95 WHIP and 16 strikeouts. In his career against this Giants lineup, he has allowed a .321 batting average with 3 home runs in 43 at bats. 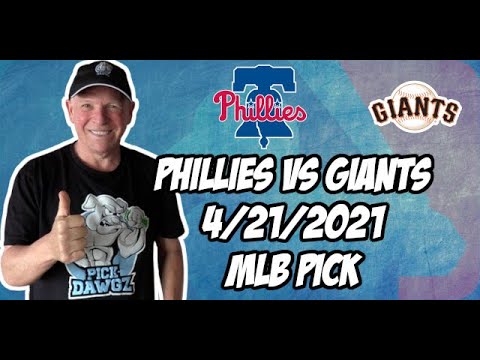