The New York Mets face the Chicago Cubs on Wednesday, April 21st at Wrigley Field for game two of a three-game series.

The Chicago Cubs defeated the New York Mets by the final score of 3-1 on Tuesday night at Wrigley. Jake Arrieta gave the Cubs 5.0 decent innings and the Cubs' bullpen took the team the rest of the way. The bullpen allowed five baserunners and earned five strikeouts in the Cubs' seventh win of the season. The Cubs' offense was led by Eric Sogard, who scored a run and earned an RBI in the win as well. The Cubs are now 7-9 on the year, which puts the team in a share of last place in the NL Central with the Pittsburgh Pirates. The New York Mets are 7-5 on the year and are currently the only team over .500 in the NL East, which is a shocker to many even this early in the season.

The New York Mets are projected to bring left-hander David Peterson to the mound to face the Cubs. Peterson is 1-1 with a 6.30 ERA through his first 10.0 innings of the season with the Mets. Peterson struggled in his first outing of the season but was able to bounce back in a big way in his next outing against the same team in the Phillies. Peterson earned 10 strikeouts and allowed only one earned run in 6.0 innings of work on April 14th.

The Chicago Cubs are projected to send right-hander Zach Davies to the bump to take on the Mets. Davies is 1-2 with a 10.32 ERA through his first 11.1 innings of the season. After a strong season debut, Davies has been roughed up badly in his last two starts for Chicago, allowing seven and four earned runs in 5.2 innings combined. Davies will look to figure it out against New York on Wednesday.

I think the Mets bounce back and earn the win on Wednesday, as I think they shell Davies like the Braves and Pirates just did. Peterson looked comfortable in his last start and facing a team that is batting under .200 this season, I like his chances. 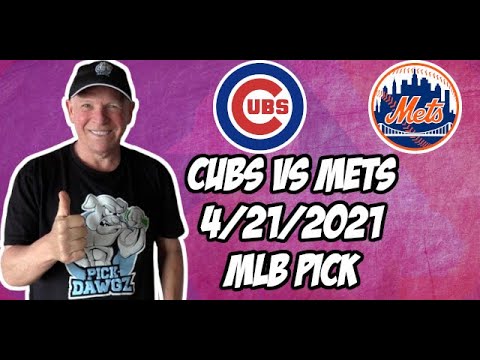