The New York Yankees will host the Atlanta Braves in an interleague matchup on Wednesday night. It will be the finale of a two-game stint at Yankee Stadium.

The Yankees won the first game 3-1 after an 8th inning rally broke a 1-1 tie. The bullpen was brilliant again, pitching 4 scoreless innings in relief of Jameson Taillon. From the dish, they had 5 hits and were 1-8 with runners in scoring position. To start the season, the Yankees have a .208 team batting average and .640 OPS. Aaron Judge leads the team with 4 home runs and a .846 OPS. DJ LeMahieu leads with a .286 average and 7 runs scored.

Atlanta lost 3-1 on Tuesday, wasting a solid performance from starter Charlie Morton. He pitched 6 innings, allowing 1 run with 6 strikeouts. From the dish they had 6 hits and were 2-8 with runners in scoring position. They had the bases loaded with one out in the 7th but could not convert. To start the year, the Braves have a .233 team batting average and .750 OPS. Ronald Acuna Jr. leads the team in most offensive categories but will be out again in this game with an abdominal strain.

The Yankees were able to scratch out a win last time out, but both teams continued to struggle from the plate. Wednesday’s matchup features two pitchers who have had success against these lineups in the past. In addition, Acuna Jr. is out again for Atlanta, so they will be without most of their production. With both bullpens starting the year strong, this one should a low total. Give me the under. 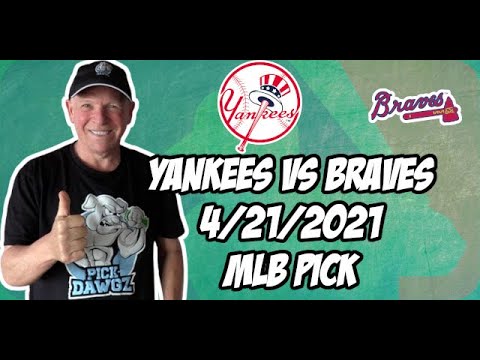