The Washington Nationals will host the St. Louis Cardinals in an NL matchup on Tuesday. It will be the 2nd of a three-game set at Nationals Park.

The Cardinals took the first game 12-5. Jack Flaherty got the win after tossing 6 innings, allowing 2 runs with 5 strikeouts. From the dish the Cardinals had 12 hits, 5 of which were home runs. Paul DeJong hit 2 homers, one of which was a grand slam. To start the season, the Cardinals have a .228 team batting average and .719 OPS. Yadier Molina leads the team with a .309 average, .932 OPS and 12 RBI.

Starting for the Cardinals on Tuesday will be righty Adam Wainwright. To start the year he is 0-2, with a 7.11 ERA, 1.89 WHIP and 14 strikeouts. Against this Nationals lineup in his career, he has allowed a .299 batting average with 10 home runs in 250 at bats.

The Nationals lost their second straight game on Monday. Starter Joe Ross was rocked by the Cardinals lineup, as he gave up 10 runs, on 8 hits with 4 home runs allowed in just 4.1 innings. From the dish they had 7 hits and were 2-7 with runners in scoring position. To start the season, the Nationals have a .262 team batting average and .719 OPS. Trea Turner leads the team with 4 home runs and a .903 OPS.

Getting the start for the Washington will be lefty Patrick Corbin. To start the season, he is 0-2 with a 21.32 ERA, 3.00 WHIP and 6 strikeouts. In his career against this Cardinals lineup, he has allowed a .221 batting average with 3 home runs in 96 at bats.

Washington is opening this one as the favorite, despite their slow start. Patrick Corbin is starting for the Nationals and has been off to a brutal start. The Cardinals have destroyed left-handed pitching this season, with a .302 average (2nd) and .934 OPS (1st). On the other side Wainwright has not been great either, but he should have enough support to scratch out a win here. Give me the Cardinals to win. 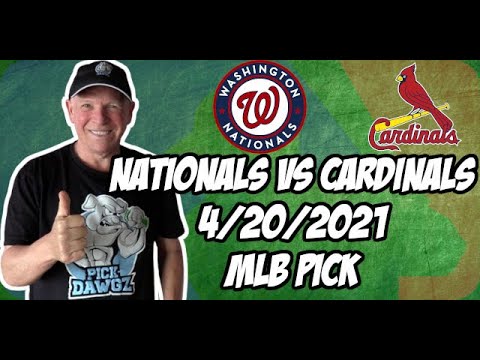