The San Francisco Giants face the Philadelphia Phillies on Tuesday, April 20th at Citizens Bank Park for game two of a three-game series.

The San Francisco Giants defeated the Philadelphia Phillies by the final score of 2-0 on Monday night in game one of this series. Runs were hard to come by, but that does not mean there was not plenty of opportunities for both teams. Kevin Gausman had to dance out of trouble in almost every inning in his 6.0 inning outing, but the Phillies could not strike on any of their chances. The Giants' offense was led by one swing of the bat, as Brandon Belt smashed a two-run home run to give the Giants their lead. The Giants are now 10-6 overall and the Phillies are back to .500 at 8-8 on the season.

The San Francisco Giants are projected to bring right-hander Logan Webb to the mound to face the Phillies. Webb is 0-1 with a 4.76 ERA through his first 11.1 innings of the season. Webb's last appearance came out of the pen as he pitched one scoreless inning against the Reds in which he struck out one batter.

The Philadelphia Phillies are projected to send right-hander Zack Wheeler to the bump to take on the Giants. Wheeler is 1-2 with a 3.00 ERA through his first 18.0 innings of the season. Wheeler allowed 10 hits and three earned runs in his last start against the Mets on April 14th. Wheeler has struck out a lot of batters but he has conceded plenty of base hits, which is a real concern going forward.

I am going to take the under in this game, as I could see a similar result on Tuesday as we saw on Monday. Neither of these teams' bats are on fire, and I think both starters will provide quality starts for their team. 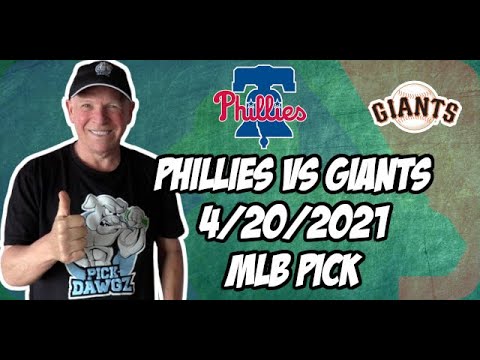