The New York Mets face the Chicago Cubs on Tuesday, April 20th at Wrigley Field for game one of a three-game series.

The New York Mets and Chicago Cubs both had the day off on Monday. The Mets finished their three-game series with the Rockies on Sunday in a 2-1 win for the Mets. The Mets also won the first game of the series in a doubleheader game to earn the series win overall. The Mets are off to 7-4 start this season and have had to deal with plenty of postponements already, whether it be due to inclement weather or COVID-19 issues. The weather in Chicago does not look the best heading into this series, which is the last thing the Mets want to see.

The Chicago Cubs ended their three-game set with the Braves on Sunday Night Baseball. The Cubs were demolished in that game by a final score of 13-4, which was the exact same score of the game on the previous day, except the Cubs got the better of Atlanta in that one. The Cubs are off to a poor start to the season with a 6-9 record overall and a 4-5 record at Wrigley Field.

The New York Mets are projected to bring right-hander Taijuan Walker to the mound to face the Cubs. Walker is 0-0 with a 2.61 ERA through his first 10.1 innings as a Met. Walker has done a great job at dancing out of jams this season, but he is still looking for his first official win as a New York Met and will do so on Tuesday night.

The Chicago Cubs are projected to send righty Jake Arrieta to the bump to take on the Mets on Tuesday. Arrieta is 2-1 with a 3.18 ERA through his first 17.0 innings of the season with the Cubs. Arrieta is off to a decent start after a disappointing 2020 campaign. Arrieta has allowed 17 hits in 17.0 innings, which is a bit concerning but makes sense as Arrieta is a pitch-to-contact pitcher.

I am going to take the Mets here, as the Cubs have lost three of their last four and are not in the right form for me to take a chance on them here. 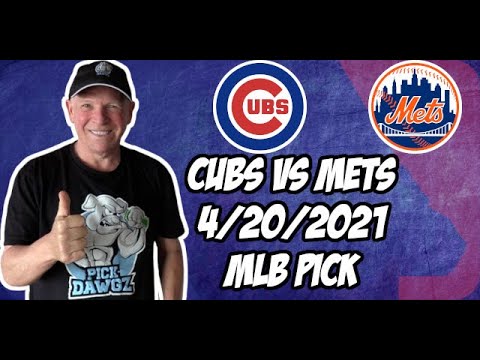