The Houston Astros and Colorado Rockies face off on Tuesday in an interleague MLB showdown at Coors FIeld.

The Houston Astros have had some issues this season at times and coming into this game they sit with a 7-8 record overall. Over the weekend the Astros played three games against the Mariners and they were only able to win one of the games. On Sunday, the Astros only managed two runs and that led to the defeat. On the season Houston is averaging 4.8 runs per game but it’s been the pitching that has really let them down. Kyle Tucker has been the best player so far this season for the Astros hitting four home runs and driving in 11 RBI’s.

ON the other side of this matchup is the Colorado Rockies who currently sit with a 4-12 record overall and this is a team that could end up being one of the worst in baseball. In the two losses over the weekend against the Mets, the Rockies offense could only manage four runs total and they are going to need the offense to be better going forward.Ryan McMahon has been the best player so far this season for the Rockies hitting six home runs and driving in ten RBI’s.

On the mound for the Rockies will be Jon Gray who comes into this game having pitched 15.2 innings on the season giving up 11 hits and five runs. In the last start,against the Dodgers, Gray went four innings giving up five hits and three runs.

I expect the Rockies are going to continue to struggle to score in this game and that will be the difference as the Astros find a way to come away with the victory. Back the Astros to win this game on the money line. 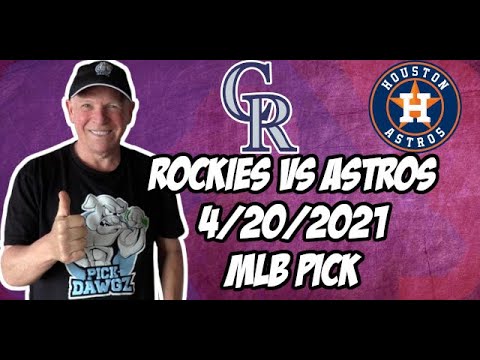