The New York Yankees will host the Atlanta Braves in an interleague matchup on Tuesday. It will be the first game of a two-game set at Yankee Stadium.

The Yankees head into this game on a 5-game losing streak. They lost 4-2 on Sunday at home against the Rays. Gerrit Cole pitched well in the start, allowing 3 runs (2 earned) with 10 strikeouts in 6.1 innings. However, from the dish the Yankees managed just 3 hits and were 1-4 with runners in scoring position. To start the season, New York has a .210 team batting average and .642 OPS. Aaron Judge leads the team with 4 home runs and a .831 OPS. Giancarlo Stanton is hitting just .179 but leads the team with 12 RBI.

Starting for the Yankees on Tuesday will be righty Jameson Taillon. To start the season, he is 0-1 with a 7.56 ERA, 1.44 WHIP and 10 strikeouts. He has allowed a .176 batting average and 2 home runs in 26 at bats against this current Braves lineup in his career.

Atlanta won their most recent game 13-4 at the Chicago Cubs. The offense led the way with 14 hits and 5 home runs. Guillermo Heredia hit two home runs, the second being a 6th inning Grand Slam that put the game out of reach. To start the season, the Braves have a .235 team batting average and .761 OPS. Ronald Acuna Jr. has been on a tear to start the season. He leads the team with a .419 batting average, 1.373 OPS, 7 home runs, and 16 RBI.

Getting the start for the Braves will be veteran righty Charlie Morton. To start the year, he is 1-1 with a 4.76 ERA, 1.29 WHIP and 21 strikeouts. In his career against this Yankees lineup, he has allowed a .169 batting average with 6 home runs and 57 strikeouts in 147 at bats.

After opening as a favorite in the AL pennant race, the Yankees are the worst team in baseball to start the season. From the plate they have been awful, ranking 5th worst in runs scored to start the season. It will get no easier here. Charlie Morton has been effective against these Yankees in his career, and on the other side you never know what you will get out of Taillon. You would think the Yankees will bounce back at some point, but I do not see that happening on Tuesday. Give me Atlanta to win. 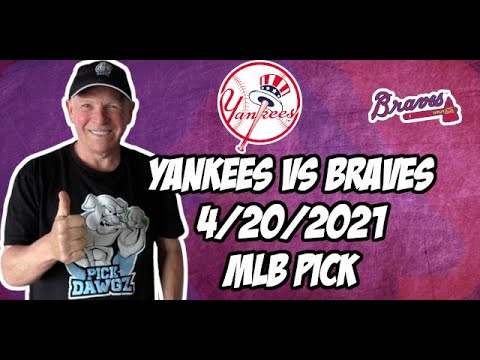