The Texas Rangers face the Los Angeles Angels on Monday, April 19th at Angel Stadium for game one of a three-game series.

The Texas Rangers were able to take the final game of a three-game set with the Orioles, despite losing the first two games by three and five runs respectively. The Rangers have lost their third series of the year and are 7-9 overall this season. The Rangers are playing a lot better on the road than at home, as Texas holds a 4-3 record away from home. The Rangers are also 7-6 as an underdog this season, which means they have been pretty valuable to start the 2021 season.

The Los Angeles Angels could not play the final games of their series with the Minnesota Twins, as the Twins had COVID-19 issues. The Angels have lost three of their last five overall after a scorching hot start to the season. The Angels are 8-5 overall this season and 5-2 at Angel Stadium as well. The Angels are also 4-4 as a favorite this season, which means bettors have lost money when taking LAA in the favorite spot each game.

The Texas Rangers are projected to bring right-hander Kohei Arihara to the mound to face the Angels. Arihara is 1-1 with a 3.07 ERA through his first 14.2 innings of the season with the Rangers. Arihara is coming off his strongest performance of the season against the Rays in which he allowed no runs and only three hits in 5.2 innings with five strikeouts.

The Los Angeles Angels are set to send right-hander Dylan Bundy to the bump to take on the Rangers on Monday. Bundy is 0-1 with a 3.32 ERA through his first 19.0 innings of the season with the Halos. Bundy has been solid in his first few starts in 2021, and the Angels will look for him to go deep into this game.

I am going to take a shot with the Rangers at plus money, as I am not ready to lay -160 odds with Dylan Bundy quite yet. I think the over is a strong play as well, but I will take the value spot with Texas. 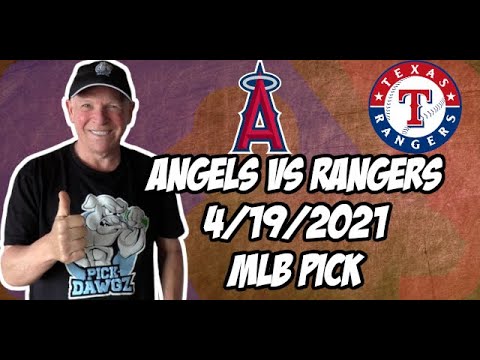