The Washington Nationals will host the St. Louis Cardinals in an NL battle on Monday. It will be the first of a three-game set at Nationals Park.

Washington comes into this game having split their 4-game series with Arizona. They lost the most recent game 5-2 on Sunday. The bullpen allowed three runs in relief of Paolo Espino. From the dish, the Nationals had 6 hits and were 0-2 with runner in scoring position. To start the season, Washington has a .267 team batting average and .728 OPS. Trea Turner leads the team with a .308 batting average, .953 OPS, and 4 home runs.

Getting the start for the Nationals on Monday will be righty Joe Ross. To start the season, he is 1-0 with a 0.00 ERA, 0.82 WHIP and 9 strikeouts. In his career against this Cardinals lineup, he has allowed a .087 batting average with 5 strikeouts in 26 at bats.

The Cardinals will come into Washington having dropped 2 of 3 in Philly, and 6 of 8 overall. In their last game they were shutout by Aaron Nola, managing just 2 hits and striking out 10 times in their 2-0 loss against the Phillies. To start the season, the Cardinals have a .221 team batting average and .679 OPS. Yadier Molina leads the team with a .340 batting average, 1.022 OPS, 4 home runs and 12 RBI.

Starting for St. Louis on Monday will be righty Jack Flaherty. To start the year, he is 2-0 with a 4.11 ERA, 1.04 WHIP and 16 strikeouts. Against this Nationals lineup in his career, he has allowed a .181 batting average with 5 strikeouts in 21 at bats.

This will be the second time both pitchers have seen these lineups this season, and both fared well the first time around. The bullpens have also been effective, with both ranking in the top 11 in batting average against. Considering both teams have also been struggling from the plate, the total looks like a play. Give me the under. 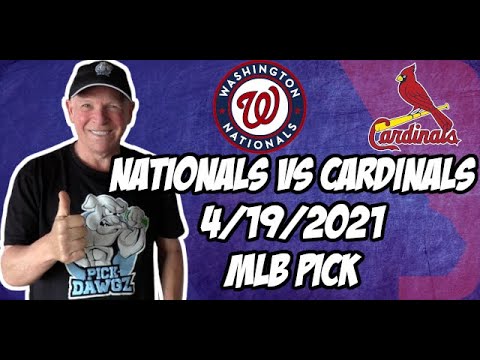