The Colorado Rockies will host the New York Mets in an NL showdown on Sunday. This will be the final game of a three-game set at Coors Field.

The two teams split their double-header on Saturday. The Mets took the first game 4-3 thanks to another gem from deGrom. He gave up 3 unearned runs in 6 innings, striking out 14. At one point he struck out 9 in a row. Francisco Lindor hit the go-ahead single to cap off a 2 run 7th. Colorado had just three hits in the game.

The Rockies won the second game 7-2. German Marquez got the win after pitching all 7 innings. He allowed just 2 hits with 6 strikeouts. From the dish, Colorado had 9 hits and were 3-8 with runners in scoring position. Josh Fuentes hit a three-run shot in the 5th for his 2nd of the season.

New York heads into this game with a .251 team batting average and .710 OPS. They currently rank last in the majors with 35 runs scored. Brandon Nimmo leads the team with a .471 batting average and 1.130 OPS. Pete Alonso leads with 2 home runs and 7 RBI.

Getting the start for the Mets on Sunday will be righty Marcus Stroman. To start the season he is 2-0 with a 0.75 ERA, 0.75 WHIP and 6 strikeouts. Against this Rockies lineup in his career, he has allowed a .288 batting average with 7 strikeouts in 32 at bats.

Colorado will start righty Antonio Senzatela in Sunday’s finale. To start the season, he is 1-2 with a 7.07 ERA, 1.64 WHIP and 7 strikeouts. In his career against this Mets lineup, he has allowed a .286 batting average with 5 home runs in 48 at bats.

Rockies starter Antonio Senzatela’s numbers may look bad, but he was highly effective in his one start that was not against the Dodgers potent offense. The Mets have been off to a slow start, so he has a chance to bounce back in this one. Marcus Stroman has been great to start the year and has done well against Colorado in the past. Last time he pitched at Coors Field he went 7 shutout innings with 7 strikeouts. I know its Colorado but runs could be hard to come by in this one. Give me the under. 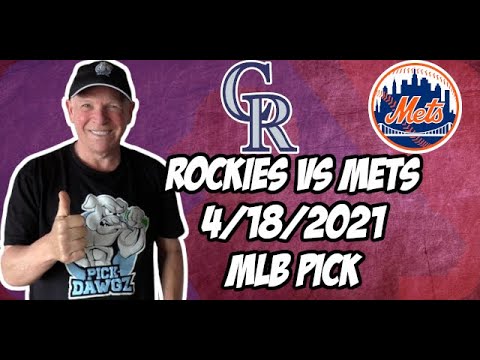