The Oakland Athletics will host the Detroit Tigers in an AL matchup on Sunday. It will be the final game of a four-game set at the Oakland Coliseum, with the A’s going for the sweep.

Detroit lost the last game 7-0 in a forgettable performance. Starter Casey Mize gave up 5 runs in as many innings. From the dish they had just 5 hits and were 0-3 with runners in scoring position. To start the season, the Tigers have a .214 team batting average and .662 OPS. Jeimer Candelario leads the team with a .293 batting average and 8 runs scored. Wilson Ramos leads with 6 home runs.

Getting the start for Detroit on Sunday will be lefty Matthew Boyd. To start the year, he is 2-1 with a 1.86 ERA, 1.09 WHIP and 4 strikeouts. In his career against this A’s lineup, he has allowed a .178 batting average with 9 strikeouts in 47 at bats.

Oakland has now won 7 in a row after their win Saturday. Cole Irvin pitched a gem, tossing 6 shutout innings with 6 strikeouts. From the dish they had 8 hits and went yard 3 times. Matt Olsen led the way, going 2-3 with 1 home run and 2 runs scored. To start the season, the A’s have a .219 team batting average and .696 OPS. Jed Lowrie leads the team with a .360 batting average, .999 OPS and 12 RBI.

Detroit has a chance to steal one here. Despite their struggles, they have a potential edge on the mound with lefty Matthew Boyd. He has started the year well and had been effective against the A’s in the past. The Tigers are missing some key guys in this one, but I still like them to come out with something extra after being shut out in their last two. I’ll roll the dice on Detroit and the plus money.  Give me the Tigers to win. 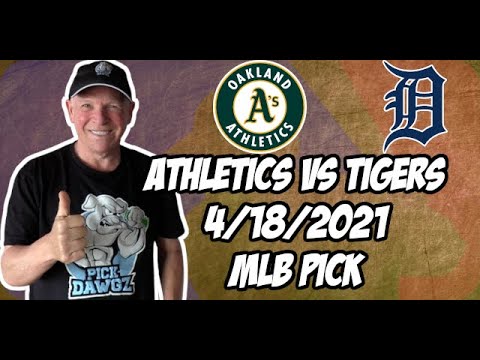