Where to Watch: MESN Stream the MLB Game of the Day all season on ESPN+. Sign up now!

The Baltimore Orioles and Texas Rangers face off on Sunday in an American League MLB showdown at Globe Life Field.

These two teams have played two games so far this series and it’s the Orioles who have been able to win each of the two games. On Saturday it was the Orioles pitching staff that was the difference as they came away with the 4-1 victory.

The Orioles currently sit in 3rd place in the American League East standings with a 7-8 record and a win in this game could maybe move them up the standings even more. Before their last two wins. The Orioles had lost two games in a row and they had only scored three runs during that stretch. Maikel Franco has had a big season for the Orioles hitting two home runs and driving in 14 RBI’s. Trey Mancini has also been good hitting three home runs and driving in 11 RBI’s.

On the other side of this matchup is the Texas Rangers who had won three games in a row before losing their last two games against the Orioles. This is a Rangers offense that hasn’t been great as of late and they need the offense to be better if they want to come away with a victory. Nate Lowe has been the best player hitting four home runs and driving in 15 RBI’s.

On the mound for the Orioles will be John Means and in 16.2 innings so far this season he has given up 13 hits and four runs.

On the mound for the Rangers will be Kyle Gibson who is coming off a game against the Rays where he went seven innings giving up four hits and two runs.

Gibson is going to be lights out in this game and that will be the difference as he leads the Rangers to a victory Back the Rangers on the money line. 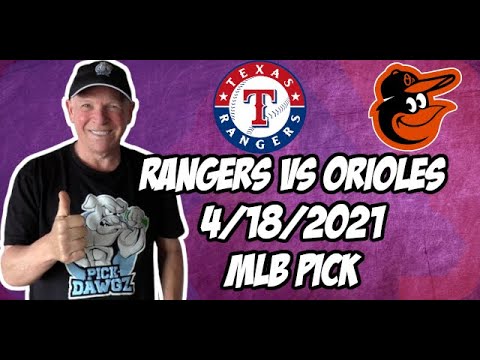