The Chicago Cubs will host the Atlanta Braves in an NL battle on Sunday night. It will be the rubber match of a three-game set at Wrigley Field.

The Cubs got the win 13-4 on Saturday, snapping a two-game skid. Trevor Williams got the win after going 5 innings, allowing 1 run with 4 strikeouts. From the dish they exploded for 14 hits. Four different players hit home runs, with Kris Bryant and Jose Contreras each hitting two. To start the season, Chicago has a .184 team batting average and .644 OPS. Wilson Contreras leads the team with a .282 batting average, 5 home runs and a 1.087 OPS.

Getting the start for the Cubs on Sunday will be righty Kyle Hendricks. To start the year, he is 0-1 with a 3.00 ERA, 1.33 WHIP and 10 strikeouts. In his career against this Braves lineup, he has allowed a .321 batting average with 3 home runs in 68 at bats.

Atlanta has lost 5 of their last 7 games after their loss on Saturday. Huascar Ynoa got the loss after getting touched up for 3 home runs in 4 innings. From the dish the Braves had 7 hits and were just 1-7 with runners in scoring position. To start the season, the Braves have a .225 team batting average and .717 OPS. Ronald Acuna Jr. has been off to a hot start, leading the team with a .433 batting average, 1.409 OPS, 7 home runs and 16 RBI.

We have some unknowns on the mound in this one. Wilson has not pitched since last season and despite getting off to a good start, Hendricks has struggled against these Braves in his career. The one thing the Braves have done well is score runs, ranking in the top 10 to start the season. The Cubs on the other hand have been one of the leagues worst aside from their outburst on Saturday. I expect them to come back down to earth in this one. Give me the Braves to win. 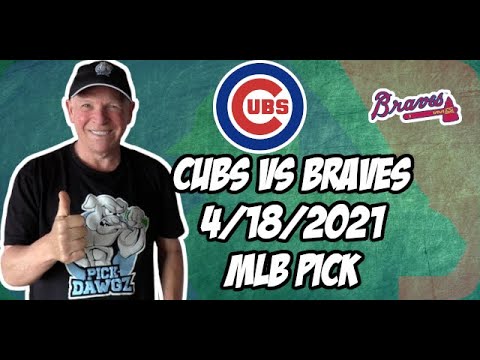