The San Francisco Giants face the Miami Marlins on Saturday, April 17th at loanDepot Park for game two of a three-game series.

The Miami Marlins defeated the San Francisco Giants by the final score of 4-1 on Friday night to win the first game of the series. The Marlins scored their runs via the long ball, as youngster Jazz Chisholm and veteran Starling Marte both hit home runs for Miami. Marte's was a three-run go-ahead bomb that gave Miami the lead in the bottom of the eighth inning. The Marlins have now won five of their last six games and have improved to 6-7 on the year and earned their second home win of the year. The Giants' two-game win streak was snapped with the loss, but San Francisco is still an impressive 8-5 on the year.

The San Francisco Giants are projected to bring right-hander Aaron Sanchez to the mound to face the Marlins. Sanchez is 0-1 with a 2.70 ERA through his first 10.0 innings of the season with the Giants. Sanchez has struck out seven batters, allowed one home run, and only one walk in the two outings he has had to start the 2021 season.

The Miami Marlins are sending their ace in right-hander Sandy Alcantara to the bump to take on the Giants on Saturday evening. Alcantara is 0-1 with a 2.45 ERA through his first 18.1 innings of the season with the Fish. Alcantara has been stellar for the Marlins, but his team has not been able to get him any run support this season. Now that the Marlins' bats are on a hot streak, can Alcantara get his first victory of the year?

I am going to take the Marlins here, as they are playing too well and hitting the ball even better. Alcantara is a tough guy to face after a road loss, and I think he does enough for a Miami win on Saturday. 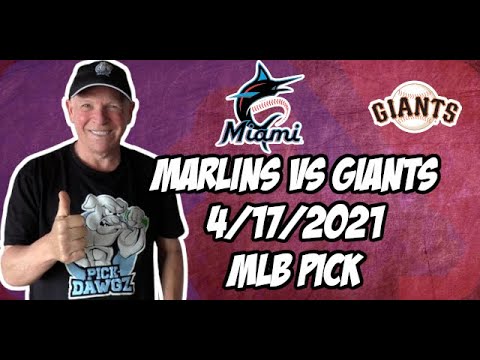