The Baltimore Orioles face the Texas Rangers on Saturday, April 17th at Globe Life Field for game two of a three-game series.

The Baltimore Orioles defeated the Texas Rangers by the final score of 5-2 on Friday night to take game one of the series. The Orioles scored their runs in the early-to-middle innings, and a three-run fifth inning gave them a 5-0 lead. The Rangers would score two runs in the bottom half of the fifth but could not muster any more offense in the rest of the ballgame. The Rangers only had four total base hits and only one walk as well. The Orioles are now 6-8 on the year with the win and the Rangers have fallen to 6-8 with their loss. Both teams are near the bottom of their division standings.

The Baltimore Orioles are projected to bring right-hander Dean Kremer to the mound to face the Rangers on Saturday. Kremer is 0-1 with a 10.50 ERA through his first 6.0 innings of the season with the O's. Kremer has had a walk and home run problem this season, as he has allowed five free passes and two home runs in a short span of work. Kremer has struck out eight batters, which is a positive to take away from his rough start to the season.

The Texas Rangers are projected to send right-hander Dane Dunning to the bump to take on the O's in game two of this series. Dunning is 1-0 with a 1.00 ERA through his first 9.0 innings of work this season. Dunning has a 0.78 WHIP and has been stellar at the back end of the Rangers rotation this season. Dunning has only allowed five hits in 9.0 innings and has 11 strikeouts as well.

I am going to take the Rangers at home here in a bounce-back spot after the loss on Friday night. This pitching matchup is too one-sided for me to take a chance on the dog, but this game should be close in the end. 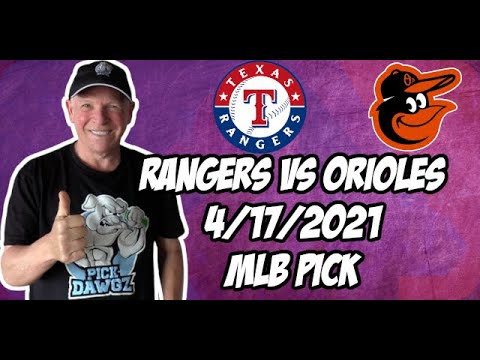