The Milwaukee Brewers will host the Pittsburgh Pirates in an NL Central matchup on Friday. It will be the first game of a three-game set at American Family Field.

Pittsburgh lost their last game 8-3 against the Padres. Mitch Keller was hit hard, giving up 7 runs on 9 hits in the start. From the dish they had 8 hits but were just 1-7 with runners in scoring position. To start the season, the Pirates have a .240 team batting average with 10 home runs. Phillip Evans leads the team with a .342 batting average and 3 home runs.

Getting the start for Pittsburgh on Friday will be righty JT Brubaker. To start the season, he is 1-0 with a 1.93 ERA, 1.29 WIHP and 10 strikeouts. Against this Brewers lineup in his career, he has allowed a .158 batting average with 1 home run in 20 at bats.

Milwaukee heads into this game having won 4 of 5 after their 7-0 win over the Cubs on Wednesday. Corbin Burnes had a great game, pitching 6 shutout innings with 10 strikeouts, while delivering with a two-run single from the plate. Combined the Brewers had 8 hits, and were 2-9 with runners in scoring position. Travis Shaw hit his third home run of the season, going 2-5 with 2 runs and 2RBI. To start the season, the Brewers have a .204 team batting average with 13 home runs. Travis Shaw leads the team with a .297 batting average, 3 home runs and 12 RBI.

Adrian Houser will get the start for the Brewers on Friday. The righty has a 1-1 record to start the season, with a 1.80 ERA, 1.60 WHIP and 7 strikeouts in 2 starts. In his career against this Pittsburgh lineup, he has allowed a .238 batting average, with 3 home runs in 43 at bats.

The Brewers seem to have hit their stride of late, winning 6 of their last 8. Meanwhile the Pirates have won 4 of their 6 and have been getting it done from the plate. Their .283 batting average over that timeframe is best in the majors. On the flip side the Brewers have struggled against right-handed pitching, with a .200 batting average and .614 OPS this season. Both teams are playing well so this is one to avoid, however I’ll take a chance on the Pirates in a winnable game on the road. Give me Pittsburgh to win. 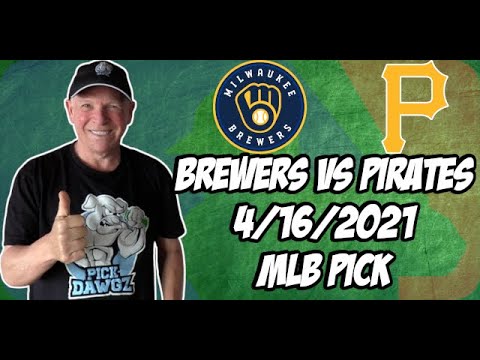