The Houston Astros face the Seattle Mariners on Friday, April 16th at T-Mobile Park for game one of a three-game series.

The Houston Astros have lost five straight games overall and were just swept by the Detroit Tigers in a three-game series. The Astros got off to a 6-1 start to the year but have struggled at home badly to start the year. Houston is 5-1 away from home and will look to break its losing streak on Friday night against a division rival in the Mariners.

The Seattle Mariners wrapped up a four-game series with the Baltimore Orioles by playing in a doubleheader on Thursday. The Mariners won both of those games and officially won three of the four games in the series to improve to 8-5 on the year. The Mariners have been a sneaky talented team to start the 2021 season and will now look for their sixth win in their last seven games.

The Houston Astros are projected to bring right-hander Jose Urquidy to the mound to face the Mariners on Friday. Urquidy is 0-1 with a 5.23 ERA through his first 10.1 innings of the season with the Astros. Urquidy has surrendered 11 hits, two walks, and one home run so far this season and has also struck out 12 batters.

The Seattle Mariners are projected to send left-hander Yusei Kikuchi to the bump in game one of this series. Kikuchi is 0-0 with a 3.75 ERA through his first 12.0 innings of the season. Kikuchi has a total of 16 strikeouts in his first two starts of the season, which is quite impressive for the Japanese southpaw. Kikuchi has allowed three home runs to his opposition, which is a bit worrisome through only 12.0 innings of work.

I am going to take a shot with the Astros in game one of this series, just because it is a bad spot for Seattle. The Mariners had to play a doubleheader on Thursday, while the Astros got the day off. Seattle also has to travel from Baltimore, all the way across the country back home to Washington state. This is a bad spot for a surging team like the M's, so I will stick with the Astros, at least for this first game. 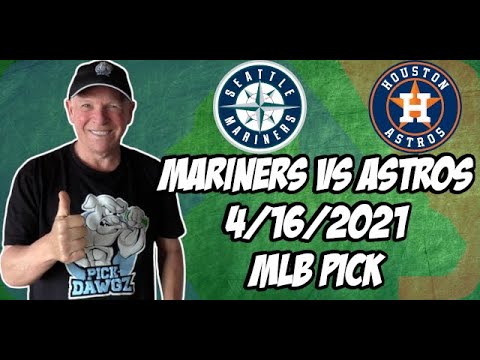