The Philadelphia Phillies and New York Mets face off on Thursday in a National League MLB showdown at Citi Field.

These two teams have played three games so far this series and it’s been the Mets that have won all three of the games. All three games have gone under the total and the Mets pitching staff has all been about the defense.

The fans in Philadelphia have to be growing restless with how their team ha looked so far in this series. This is a Phillies lineup that has a lot of talent up and down, but that hasn’t been something that has resulted in a lot of runs this series. Did Gigorious has been the best player for the Phillies all year hitting two home runs and driving in nine RBI’s.

On the other side of this matchup is the Mets who have a strong pitching rotation and it has led them to success this season. Dominic Smith has been the best offensive player so far this season for the Mets hitting two home runs and driving in six RBI’s.

On the mound for the Phillies is Zach Eflin who struggled in the last season against the Phillies going six innings giving up seven hits and four runs.

On the mound for the Mets will be Jacob deGrom who has gone 14 innings so far this season giving up only one run total.

Both teams are going to struggle to score in this game and it would’t be shocking if this was a 1-0 or 2-0 game. Back the under to cash. 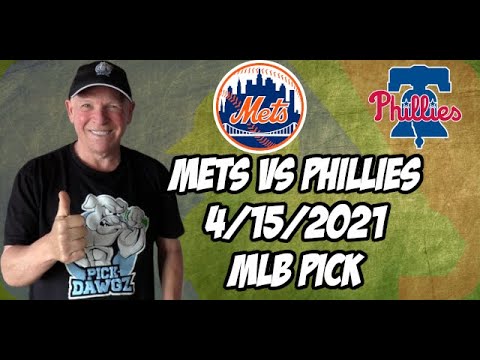