The Detroit Tigers face the Oakland Athletics on Thursday, April 15th at Oakland Coliseum for game one of a four-game series.

The Detroit Tigers are on cloud nine after their three-game sweep over the Houston Astros this week. The Tigers were heavy dogs, almost +200 each game in the series, and were able to win each game by more than one run each time. The Tigers snapped their losing streak with those wins and now find themselves with a 6-6 record. The Oakland A's swept their two-game set with the Arizona Diamondbacks on the road this week and had the day off on Wednesday. The A's got off to a miserable start this season, but now Oakland has won four straight games and currently owns a 5-7 record overall. Both teams are red hot and will put their winning streaks on the line on Thursday.

The Detroit Tigers are projected to send the southpaw Tarik Skubal to the mound to face the Athletics on Thursday. Skubal is 0-1 with a 7.71 ERA through his first 9.1 innings of the season for the Tigers. Skubal has only faced the Indians this season, but he has not looked sharp nonetheless. Skubal has allowed three home runs and nine base hits to a team that was just no-hit on Wednesday night, which is not acceptable.

The Oakland Athletics are projected to bring left-hander Sean Manaea to the bump to take on the Tigers in game one of this series. Manaea is 0-1 with a 5.06 ERA through his first 10.2 innings of the season with Oakland. Manaea is not off to the strongest start to 2021 either, but after a really bad start against the Astros in his season debut, he was able to bounce back with a much sharper performance against Houston on April 9th.

I think we are getting the A's at a good price because of the Tigers' big win streak, and for that reason, I will take Oakland and fade Skubal here. Skubal has great stuff but he has been missing inside the zone too many times for me to take a chance on Detroit on Thursday. 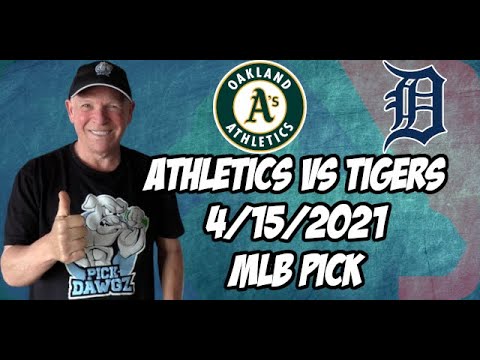