The Washington Nationals will face the Arizona Diamondbacks in an NL showdown on Thursday. It will be the first of a four-game set at Nationals Park.

The Diamondbacks come into this game having dropped two straight after their 7-5 loss to Oakland last time out. They jumped out to a 5-0 lead, but the bullpen gave up 6 runs in 5 innings to give the game to the A’s. From the dish, Arizona had 8 hits and were 2-9 with runners in scoring position. Carson Kelly hit a three run home run in the 2nd for his first home run of the season. To start the year, the Diamondbacks have a .229 team batting average with 14 home runs. Asdrubal Cabrera leads the team with a .273 batting average and 9 RBI.

Getting the start for Arizona will be righty Merrill Kelly. To start the year he is 0-2 with an 8.10 ERA, 1.70 WHIP and 5 strikeouts. In his career against this Nationals lineup, he has only faced Josh Bell, Starlin Castro and Kyle Shwarber, who have gone a combined 3-7 with 1 home run.

Washington took the rubber game 6-0 at St. Louis in their last game. From the mound, starter Joe Ross and the bullpen combined for a 4-hit shutout. From the plate they had 9 hits and were 3-12 with runners in scoring position. Ryan Zimmerman homered for the first time this season, hitting a two run shot in the 3rd to start the scoring. Through their first 9 games, the Nationals have a .265 batting average with 6 home runs. Juan Soto leads the team with a .375 batting average, 2 HR, and 7 RBI.

Starting for the Nationals will be lefty Patrick Corbin. In his one start this season he went 4.1 innings, allowing 6 runs and 6 hits against the Dodgers. In his career against this Diamondbacks lineup, he has allowed a .126 batting average with 14 strikeouts in 36 at bats.

Washington has continued to swing the bat well and will have a good matchup against Merrill Kelly. He has had a tough time in his first two starts, giving up a home run in each game and over a hit per inning. Patrick Corbin did not look good last time out either, but he was facing one of the best lineups in baseball. This time out he will face an Arizona lineup he has had success against in the past. Give me the Nationals to win. 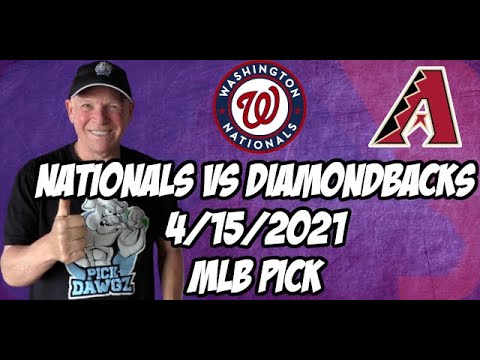