The St. Louis Cardinals will host the Washington Nationals in the rubber game of a three-game set on Wednesday afternoon.

The Nationals lost 14-3 on Tuesday after a forgettable performance from Stephen Strasburg. He pitched 4 innings in the start, allowing 8 runs on 8 hits with 3 HR allowed. From the dish they had just 6 hits, and were 2-9 with runners in scoring position. To start the season the Nationals have a .266 team batting average, with 5 HR. Juan Soto leads the team with a .375 batting average and 6 RBI.

Getting the start for Washington will be righty Joe Ross. In his first start he tossed 5 shutout innings, allowing 2 hits with 4 strikeouts. He has only faced 4 of these Cardinals batters in his career, allowing a .171 batting average with 3 strikeouts in 18 at bats.

St. Louis had a monster performance from the plate in their 14-3 win on Tuesday. They had 15 hits in the game and were 6-10 with runners in scoring position. Goldschmidt, Carpenter and Arenado all homered off Strasburg. To start the season, the Cardinals have a .236 team batting average with 15 home runs. Dylan Carlson leads the team with 3 home runs and 9 RBI.

The Cardinals will start veteran righty Adam Wainwright on Wednesday. To start the season, he is 0-1 in 2 starts, with an 8.22 ERA, 1.96 WHIP, and 7 strikeouts. In his career against this Nationals lineup, he has allowed a .336 batting average with 9 HR in 228 at bats.

Despite their success from the plate, the Nationals have not been scoring a lot of runs. Eventually that success will translate on the scoreboard and will have a good matchup in Wainwright on Wednesday. He has allowed over a hit per inning to start the season and has struggled against the Nationals in his career. On the other side, outside of their explosion against Strasburg on Wednesday, the Cardinals have scored just 13 runs in their last 4 games. Give me the Nationals to win. 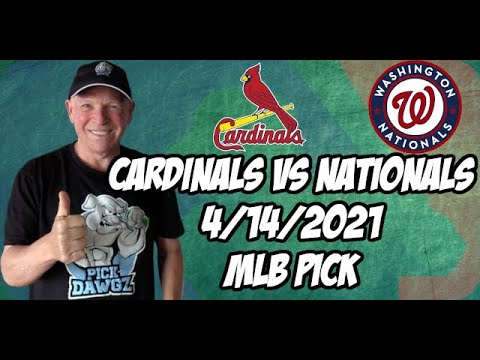