The New York Yankees will face the Toronto Blue Jays in an AL East battle on Wednesday afternoon. It will be the rubber game of a three-game set between these division rivals.

New York lost 7-3 on Wednesday after a poor start from Jameson Taillon. He went just 3.2 innings, allowing 5 runs on 8 hits. From the dish they had 8 hits and were 1-4 with runners in scoring position. Aaron Hicks had a good day from the plate, going 3-4 in the loss. To start the season, the Yankees have a .234 team batting average, with 11 home runs. Gary Sanchez leads the team with a .296 batting average and 2 home runs.

The Yankees will start veteran righty Corey Kluber on Wednesday. In his first two starts he has been shaky, with a 5.68 ERA, 2.37 WHIP and 8 strikeouts in 6.1 innings pitched. Against this Blue Jays lineup in his career, he has allowed a .275 batting average with 2 home runs in 31 at bats.

Toronto won on Wednesday thanks to a solid start from Ryu. He went 6.2 innings, allowing just 1 unearned run with 7 strikeouts. From the plate they had 10 hits, and were 3-11 with runners in scoring position. Marcus Semien and Rowdy Tellez both hit solo home runs in the game. To start the year, the Blue Jays have a .224 team batting average with 13 home runs. Vladimir Guerrero Jr. leads the team with a .364 batting average.

The Blue Jays will start righty Ross Stripling in Wednesday’s contest. He has been hit hard in two starts, giving up 7 runs in 8.1 innings with 10 strikeouts. In his career against this Yankees lineup he has allowed a .287 batting average, with 2 home runs in 57 at bats.

The Yankees and Blue Jays have both had an up and down start to the season. One constant has been the bullpens, with both boasting ERA’s that rank in the top three in the majors. The run line is high because both starters have had rough starts to the season. However, I expect both to be on short leashes in the final game of this series. With both bullpens at full strength, we should see less runs than the line indicates. Give me the under. 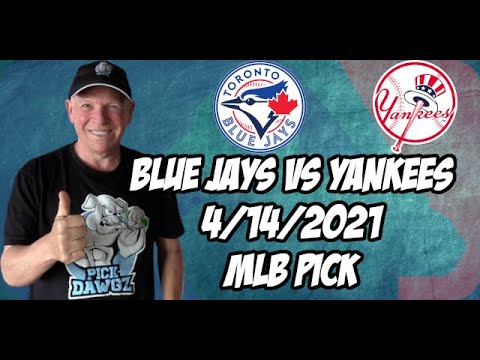