The Washington Nationals will face the St. Louis Cardinals in an NL matchup this Tuesday. This will be the second game of a three-game set in St. Louis.

The Nationals were able to snap their 5-game losing streak with a 5-2 win on Monday. From the mound, 5 pitchers combined for 11 strikeouts, with only 3 walks issued. From the dish, the Nationals had 12 hits and were 4-14 with runners in scoring position. Andrew Stevenson hit a pinch-hit home run in the 7th for his first of the season. To start the year, the Nationals have a .279 team batting average. Juan Soto leads the team with a .375 batting average and 2 home runs.

Starting for the Nationals will be Steven Strasburg. In his first start he pitched 6 scoreless innings, allowing just one hit and 2 walks with 8 strikeouts. Against this Cardinals lineup in his career, he has allowed a .235 batting average with 2 home runs in 82 at bats.

St. Louis will look to get back on track after losing their third straight on Monday. In their last game, starter John Gant got the loss after giving up 3 runs innings. From the dish, the Cardinals had just 6 hits and were 1-6 with runners in scoring position. Yadier Molina hit a solo shot in the 6th for his second of the season. So far in 2021, the Cardinals have a .216 team batting average with 12 home runs through 10 games. Molina leads the team with a .353 batting average, while Dylan Carlson leads with 3 HR and 9 RBI.

Getting the start for St. Louis on Tuesday will be young righty Jack Flaherty. Last time out he pitched a gem, going 6 shutout innings, allowing just 1 run with 6 strikeouts. Against this Nationals lineup in his career, he has allowed a .194 batting average, with 5 home runs in 71 at bats.

The Nationals have been swinging the bat well, and welcomed back Kyle Schwarber to the lineup in their last game. He will revamp an already potent lineup. With an even matchup on the mound to start, and two bullpens that have shown their cracks, this one will come down to who can produce at the plate. I’ll take my chances with Nationals and the plus money. Give me Washington to win. 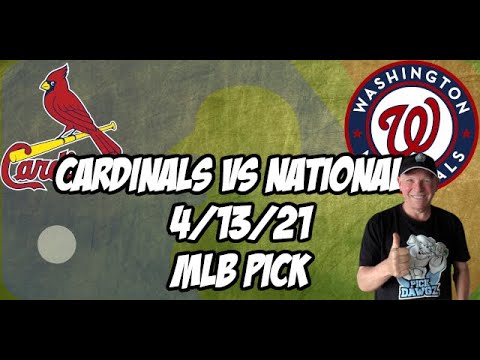