Where to Watch: BSSW, BSUN Stream the MLB Game of the Day all season on ESPN+. Sign up now!

The Texas Rangers need a win to snap a four-game losing streak. The Rangers have scored four runs in their last three games and zero runs in three of their last four games. The Rangers have lost four of their last five games when scoring three or less runs. Jose Trevino leads the Rangers with 10 hits while Isiah Kiner-Falefa and Nate Lowe have combined for 18 hits and 20 RBI. Kyle Gibson gets the ball, and he is 1-0 with a 7.11 ERA and nine strikeouts this season. Gibson is 4-5 with a 5.12 ERA and 42 strikeouts in his career against the Rays.

The Tampa Bay Rays look for a win after winning three of their last four games. The Rays have scored nine runs in their last three games and four or more runs in six of their last nine games. The Rays have split their last six games when scoring four or more runs. Randy Arozarena leads the Rays with 11 hits and five RBI while Austin Meadows and Willy Adames have combined for 17 hits and seven RBI. Ryan Yarbrough gets the ball, and he is 0-1 with a 5.06 ERA and five strikeouts this season. Yarbrough is 1-0 with a 4.91 ERA and 13 strikeouts in his career against the Rangers.

The Texas Rangers are a team you simply can't back with much confidence these days, as the offense has now been shutout in three of their last four games. For a major league team, that's simply unacceptable. The Tampa Bay Rays are who they are, and we knew their recent struggles weren't going to last long. Yarbrough is also a pitcher who won't continue his issues out of the gate. Yarbrough is better than what he's shown up to this point. Give me the Rays and the RL for max betting value. 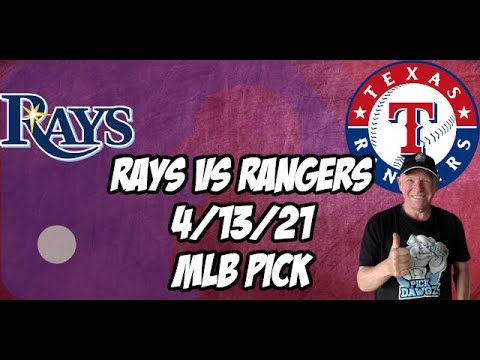