The New York Yankees and the Toronto Blue Jays face off on Tuesday for game 2 of their MLB AL East series.

The Toronto Blue Jays are off the 4-5 start this season after falling to the Yankees on Monday in Dunedin. With no true home field the Blue Jays are up against it this season but have a roster full of talent to help get them through it. As a team the Blue Jays are hitting .221 with Vladimir Guerrero Jr., leading the way hitting .379 with 2 home runs and 8 RBI’s. Randal Grichuk is hitting .344 with 8 RBI’s and Bo Bichette is hitting .270 with 7 RBI’s but he has struck out 12 times. Hyun Jin Ryu gets his third start of the year and he enters this game with an 0-1 record sporting a 2.92 ERA in 12.1 innings of work. The Toronto bullpen allows hitters to bat .215 against them with 3 saves. The Blue Jays had no answer for Gerit Cole on Monday but after taking two of three to start the season in the Bronx, the Blue Jays shouldn’t be shaken.

The New York Yankees over their past two have started to look more like the Yankees many were expecting to see. On Sunday the Yankees salvaged a win over the Rays scoring four runs in the top of the 10th inning and they followed it up on Monday with a win over the Jays with a strong pitching performance and just enough offense. The Yankees as a team are hitting .240 with Brett Gardener hitting .353. Gio Urshela is hitting .323 while Aaron Judge is hitting .310 with 2 home runs. Jameson Taillon gets his second start of the season after allowing 3 hits and two runs while striking out 7 over 4.2 inning in his Yankees debut. The Yankees bullpen has a 1.73 ERA as opponents are hitting just .150 against them. While the Yankees have now won two games in a row, they hardly look like a eam that has hit their stride and are ready to go on a tear.

Neither of these teams are playing to the level of the expectations that are on them but there are a lot of games to be played. Like in his last start, there is way too much value being placed on Taillon who has yet to show he can deliver on a consistent basis and he is in a bad spot here. Ryu when he is on is one of the best in baseball and look for the Blue Jays to give him plenty of support as he grabs his first win of the season. 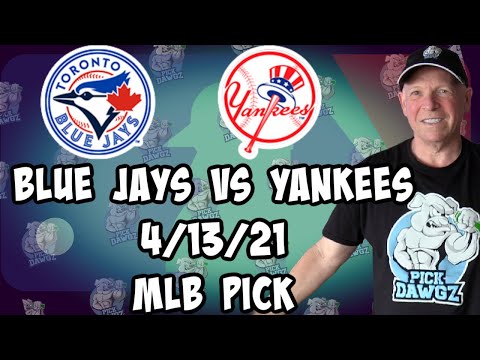