The Washington Nationals will face the St. Louis Cardinals in an NL matchup on Monday. It will be the first game of a three-game set in St. Louis.

The Nationals have now lost 5 in a row after losing 3-0 to the Dodgers on Sunday. Scherzer pitched 6 solid innings, allowing 1 run on 3 hits with 6 strikeouts. From the dish they had 7 hits, but were 0-7 with runners in scoring position. To start the season, the Nationals have a .268 team batting average, 5th in the majors. Ryan Zimmerman leads the team with a .381 batting average.

Starting for the Nationals will be Steven Strasburg. In his first start he pitched 6 scoreless innings, allowing just one hit and 2 walks with 8 strikeouts. Against this Cardinals lineup in his career, he has allowed a .235 batting average with 2 home runs in 82 at bats.

St. Louis will look to right the ship after dropping their last two to the Brewers. They lost 9-3 on Sunday, after their starter Daniel Ponce de Leon was rocked for 7 runs on 6 hits in just 1.1 innings. From the plate they had 8 hits, and were 2-8 with runners in scoring position. To start the season, the Cardinals have a .219 team batting average. Yadier Molina leads the team with a .367 batting average. Dylan Carlson leads the team with 3 home runs and 9 RBI.

The Cardinals will send out righty John Gant to start on Monday. In his first start he went 4 scoreless innings, allowing 4 hits with 4 strikeouts. Against this Washington lineup in his career, he has allowed a .240 batting average, with 1 HR in 32 at bats.

The Nationals are too talented to keep playing this poorly, and will have a good matchup here. Strasburg will give them the edge on the mound, and he looked good in his first start of the year. The Cardinals have record is a little inflated when you look at their performance from the plate and their 5.35 team ERA that ranks 4th worst in the majors. I like the value with Washington here, getting plus money when they have the edge on paper. Give me the Nationals to win. 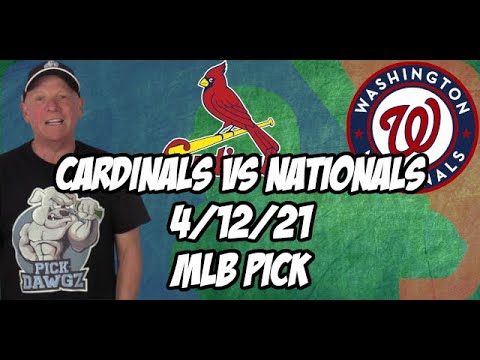