The Texas Rangers face the Tampa Bay Rays on Monday, April 12th at Tropicana Field for game one of a four-game series.

The Texas Rangers were swept by the San Diego Padres in a three-game series at home this weekend. Each game felt like the Rangers were at least competitive (minus the first game in which Texas was no-hit), but the Rangers could not grab a victory over the NL West's Padres. The Rangers are now 3-6 to start the season and have lost four of their last six. The Rangers will look to snap their losing streak, but it will not be easy against this Rays team.

The Tampa Bay Rays could not complete the three-game sweep over their hated rivals in the New York Yankees on Sunday. The Rays had a 4-3 lead for a majority of the game but blew that lead late and lost in extra-innings, 8-4. The Rays still won the first two games of the series for the series win and are now 4-5 on the year. The Rays are tied with three other teams (Yankees, Blue Jays, Orioles) in the AL East standings currently.

The Texas Rangers are projected to bring right-hander Dane Dunning to the mound to face the Rays. Dunning tossed 5.0 impressive innings in his season debut against the Toronto Blue Jays. Dunning allowed only one earned run and struck out six batters in a performance that earned him a win.

The Tampa Bay Rays are sending right-hander Tyler Glasnow to the bump for game one of this series. Glasnow has a 0-0 record with an outstanding 0.75 ERA in his first 12.0 innings of the season with Tampa Bay. Glasnow has struck out 15 batters and only allowed two walks to his opposition this season. Glasnow has also only coughed up five hits and not allowed a single home run.

The Rays are heavy favorites in this game and to me, there is no value in taking them. I think the strongest play is on the under, as I expect two strong outings from both of these starters. 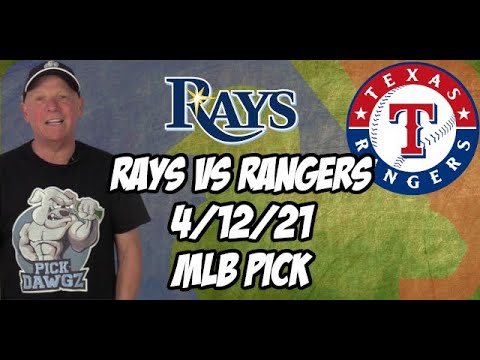