The Pittsburgh Pirates will host the San Diego Padres in the first of a four-game set on Monday night. This will be the first time the two have faced since 2019.

The Padres come into this game fresh off of a sweep at Texas. Last time out they won 2-0, thanks to a combined effort from the bullpen. Seven pitchers participated in the shutout, combining for 11 strikeouts in the game. From the plate they had just 5 hits, but 2 of them were solo home runs. Manny Machado and Trent Grisham both went yard, each hitting their second of the season. To start 2021, the Padres have a .257 team batting average. Eric Hosmer leads the team with 3 home runs and 8 RBI.

Getting the start for the Padres on Monday will be Yu Darvish. In his last start he went 6 innings, allowing just 1 run on 3 hits with 7 strikeouts. He has done well against this Pirates lineup in the past; in 47 at bats, he has allowed a combined .109 batting average with 18 strikeouts.

Pittsburgh has now won two in a row after their 7-1 victory over the Cubs on Sunday. Starter JT Brubaker went 5.1 innings, allowing 1 run on 4 hits. From the dish they had 14 hits and were 4-13 with runners in scoring position. Wilmer Difo had a pinch-hit home run in the 7th, his first of the year. To start the season the Pirates have a .232 team batting average. Phillip Evans leads the team with a .393 batting average and 3 home runs.

The Pirates will start Trevor Cahill against the Padres on Monday. In his one start of 2021, he went 4 innings, allowing 7 runs on 9 hits to the Cincinnati Reds. Against this Padres lineup in his career, he has allowed a .151 batting average with 2 home runs in 27 at bats.

The Padres have been one of the best in baseball to start the season and will face an inferior Pirates squad on Monday. Yu Darvish looked great in his last start and has shut down this Pirates lineup in their previous matchups. On the other side, even if Cahill bounces back from a rough first start, he will likely be on a short leash, and turning it over to a bullpen that has a 5.30 ERA in 37.1 innings so far this year. Not much value in the Padres money line here, so I’ll take a chance on the run line with San Diego. Give me the Padres to win by a couple. 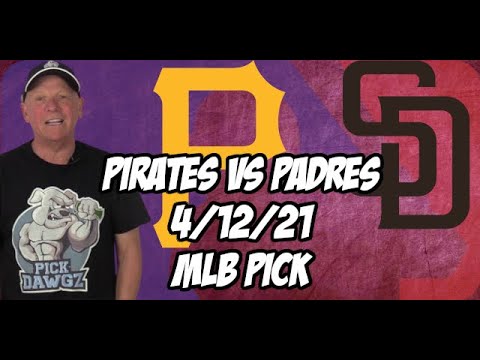