The Philadelphia Phillies head on the road to face the New York Mets in an NL East battle Monday night. It will be the first of a four-game set at Citi Field.

The Mets head into this game after splitting two against Miami. The third game was suspended. In their most recent tilt, they lost 3-0 after Jake deGrom was left handing by his offense again. He pitched well, going 8 innings, and allowing just 1 run with 14 strikeouts, but the offense had just three hits. One of those hits was his own, so it was as if he was the only Met that came to play. To start the season, the Mets have a .222 team batting average. Brandon Nimmo leads the team with a .412 batting average.

Starting for the Mets on Monday will be lefty David Peterson. In his first start at Philadelphia, he gave up 6 runs on 7 hits with 5 strikeouts. All-time against this Mets lineup, he has allowed a .240 batting average with 3 home runs in 26 at bats.

Philadelphia was able to salvage the final game of their series with Atlanta 7-6 on Sunday. Starter Matt Moore went 5 innings, allowing 5 runs on 9 hits with 5 strikeouts. From the dish they had 8 hits, and were 1-4 with runners in scoring position. Bryce harper, Didi Gregorius, and Rhys Hoskins all homered for the second time this season. To start the year, the Phillies have a .242 team batting average. JT Realmuto leads the team with a .346 batting average and 6 RBI.

The Phillies will start righty Chase Anderson on Monday. In his first start against the Mets, he went 5 innings, allowing 2 runs on 2 hits with 3 strikeouts. All-time against this Mets lineup he has allowed a .155 batting average with 7 home runs in 93 at bats.

Not sure how New York is favored here. They have been awful to start the year, and they are facing a pitcher who has done well against them in the past. The Phillies have also been one of the all-around better teams in baseball through the first few weeks. This Mets team is capable of big things, but until they start swinging the bat consistently, I do not feel confident backing them. Give me the Phillies to win with the plus money. 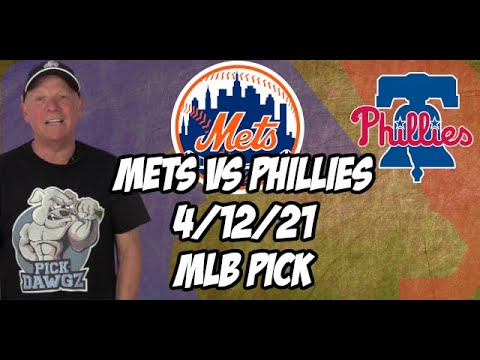