The New York Yankees face the Toronto Blue Jays on Monday, April 12th at TD Ballpark for game one of a three-game series.

The New York Yankees earned a much-needed victory over the Tampa Bay Rays on Sunday to avoid the three-game sweep and move to 4-5 on the year. The Yankees trailed until late in the game but were able to tie the game and force extra innings. The Yankees scored four runs in the top of the 10th inning and that was more than enough for the 8-4 victory. The Yankees will now look to take down a division rival that already earned a series win against them to start the season.

The Toronto Blue Jays lost two of three to the Los Angeles Angels at home in their last series. The Blue Jays found a win in game three of the series as well, as Toronto took out its frustration in a 15-1 route. The Blue Jays are now 4-5 and are now tied with the Yankees, Rays, and Orioles in the standings.

The New York Yankees are projected to send their ace in right-hander Gerrit Cole to the mound to face the Blue Jays. Cole is 1-0 with a 1.46 ERA in his first 12.1 innings of the season with the Yanks. Cole has struck out 21 batters and has only allowed two walks to the opposition this season.

The Toronto Blue Jays are projected to bring left-hander Robbie Ray to the bump for game one of this series. Ray will be making his season debut in this start against one of the most dangerous lineups in the league. Ray had a record of 2-5 with an ERA of 6.62 with the D-Backs and Blue Jays in 2020.

There are no line prices for this game yet, so be sure to check back soon for updates. I like the Yankees to win and win very easily in this one. Ray allows far too many homers and free passes for me to back him against Cole, even at home. 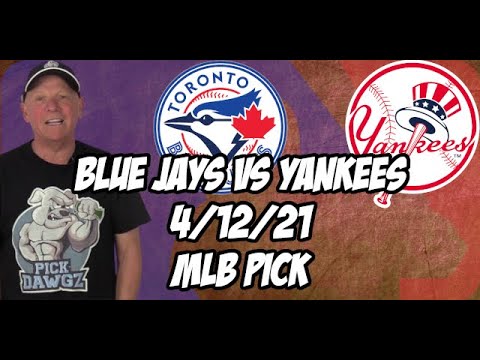