The Chicago Cubs will head on the road to face the Milwaukee Brewers in an NL Central matchup on Monday night. It will be the first game of a three-game set.

Milwaukee won 9-3 in their last game against St. Louis for their second straight win. In the game, starter Brett Anderson pitched 5 innings, allowing just 1 run on 5 hits. From the dish, they hit 3 home runs and were a combined 3-10 with runners in scoring position. To start the season, they have a .202 team batting average, 4th worst in the majors. Omar Narvaez leads the team with a .455 batting average, while Travis Shaw leads the team with 2 HR and 10 RBI.

Getting the start for Milwaukee on Monday will be young righty Freddy Peralta. In his first start against Chicago, he went 5 shutout innings, allowing just 1 hit with 8 strikeouts. Against this Chicago lineup during his career, he has allowed a .151 batting average with 0 HR and 21 strikeouts in 52 at bats.

The Cubs will come into this game having lost 4 of 5 after their 7-1 loss to Pittsburgh on Sunday. Starter Trevor Williams gave up 5 runs and 10 hits in 3.1 innings, a deficit the offense could not overcome. From the dish they managed just 5 hits, and were 0-6 with runners in scoring position. Their only run came on a 2nd inning home run from Javier Baez, his third of the year. Baez leads the team with a .242 batting average, 3 home runs and 6 RBI. As a team they have a .167 batting average, worst in the majors.

Starting for Chicago will be Adbert Alzolay. In his first start, he faced this same Milwaukee team and gave up 4 runs on 4 hits in 5 innings pitched. He also gave up a pair of home runs in the game.

Milwaukee will be heading home after going 4-2 on their road-trip. They have swung the bat well, and their pitching has been outstanding. Their 3.22 team ERA is 8th in the majors, and they will start the youngster Peralta on Monday. He looked great in his first start and will have a chance to repeat that effort against a struggling Cubs lineup he has had success against in the past. I can only see this one going one way the way this season has started. Give me the Brewers to win. 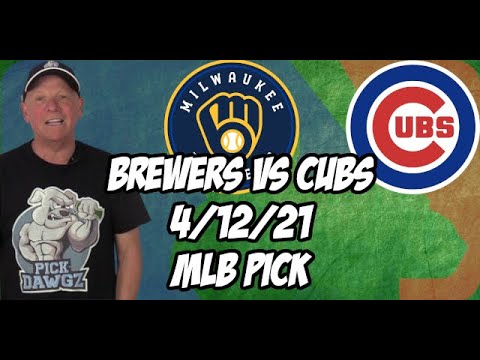