The New York Yankees will host the Tampa Bay Rays in an AL East battle this Sunday afternoon. The Yankees will look to avoid being swept after dropping the first two games of the series.

New York has now lost 3 in a row after their 4-0 loss to the Rays on Saturday. It was the second time they have been shutout in their first 8 games. Starter Domingo German allowed the games only runs, giving up 4 on 8 hits in 4 innings. From the dish the Yankees managed just 5 hits and were 0-4 with runners in scoring position. To start the season, the Yankees have a .238 team batting average, with 8 home runs. Aaron Judge leads the team with a .346 batting average and 2 home runs.

Getting the start for New York on Sunday will be lefty Jordan Montgomery. In his first start he pitched 6 scoreless innings, allowing just 4 hits with 7 strikeouts. He has been hit hard by the handful of Rays hitters he has faced. In 11 career at bats he has allowed 7 hits with 2 home runs.

The Tampa Bay Rays have gotten back on track in New York, taking the first two here after getting swept in Boston. It was a combined effort on the mound in their last win. Six pitchers got involved in the shutout, striking out 9 in the game. From the dish the Rays had 10 hits, with Meadows and Arozarena both hitting solo shots off German. So far in 2021 the Rays have a .239 team batting average, with 8 home runs. Austin Meadows leads the team with 3 home runs and 6 runs scored.

Brent Honeywell Jr. will take the mound for the first team in his career on Sunday. The 26 year-old righty from Georgia last pitched during spring training. He only pitched one inning, allowing 1 run.

The Yankees have looked bad in this series, with the Rays seemingly leading the entire time. The Yankees will send out Jordan Montgomery, who was lights out in his first start. It is hard to envision the Yanks getting swept here, despite the slow start. Give me New York to win. 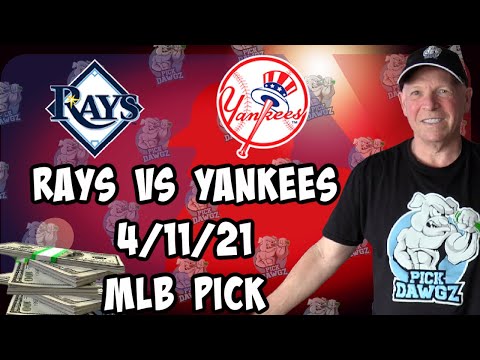