The San Francisco Giants will face the Colorado Rockies in the final game of a three game set on Sunday. The Giants will be going for the sweep after taking the first two games.

San Francisco has continued to pitch well, having given up 4 runs or less in 7 consecutive games. Last time out, the bullpen pitched 4 scoreless innings in relief of Logan Webb, holding onto a one run lead for their 3rd straight win. From the dish they had just 5 hits, but Brandon Crawford hit a three-run home run in the 6th to take the lead. To start the season, the Giants have a .197 team batting average, 4th worst in the majors. Their 3.04 team ERA ranks 5th.

Starting for the Giants will be righty Anthony DeSclafani. In his first start at the Padres, he went 5 innings, allowing 1 run on 4 hits. In his career against this Rockies lineup, he has allowed a .137 batting average with 1 home run in 28 at bats.

The Rockies wasted a solid performance from starter Chi Chi Gonzalez, who went 5 innings, allowing just 1 run. Colorado had 9 hits in the game but were just 1-6 with runners in scoring position. Ryan McMahon hit a two-run home run in the 5th for his 5th of the year. To start the year, the Rockies have a .231 team batting average with 13 home runs.

San Francisco should have the advantage on the mound in this one, with DeSclafani looking good in his last start and boasting solid number against these Rockies. German Marquez has had the opposite experience against the Giants, and he has already issued 8 walks in his first 10 innings pitched this season. Give me the Giants to win and get the sweep. 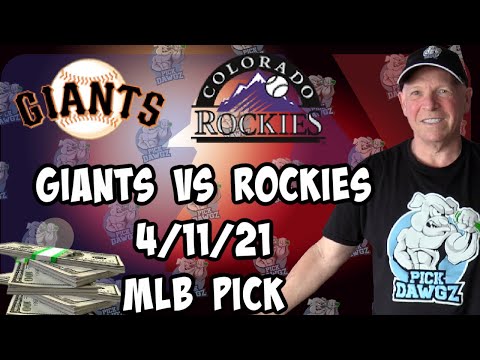