The Chicago Cubs face the Pittsburgh Pirates on Sunday, April 11th at PNC Park for game three of a three-game series.

The Pittsburgh Pirates defeated the Chicago Cubs by the final score of 8-2 on Saturday evening. The Pirates have their second win over their NL Central rivals and the Cubs now lead the season series 3-2 as we head into the final game of this three-game series in Pittsburgh. The Pirates scored seven runs in the bottom of the second inning and the rest was history. A one-time Cubs 1-0 lead was gone in an instant and the Pirates never looked back. The Pirates are now 2-6 on the year, as their wins over Chicago have been their only wins this season. The Cubs are 4-4 and are in third place in the NL Central standings, tied with the Brewers.

The Chicago Cubs are projected to bring right-hander Trevor Williams to the mound to face the Pirates on Sunday. Williams earned a win in his first start of the season against the Brewers, pitching 6.0 strong innings while only allowing two earned runs. Williams struck out six batters in the victory and is now 1-0 with a 3.00 ERA to start the year.

The Pittsburgh Pirates are projected to send right-hander JT Brubaker to the bump for game three of this series. Brubaker gave the Pirates 4.0 strong innings in his first start of the year, allowing only one earned run while striking out six batters. Brubaker did walk four guys in his outing, which is something he will need to watch out for in this start. Brubaker usually does not go too far in games, but he does have electric stuff when he is on his game.

I am going to fade the Cubs in this spot, as their offense as a team has been a mess and there is no way I can lay that price on the road here. The Pirates are a very live dog in this game in my opinion, and although they will more than likely not repeat Saturday's result to a T, I do think they hold a ton of value in this spot. 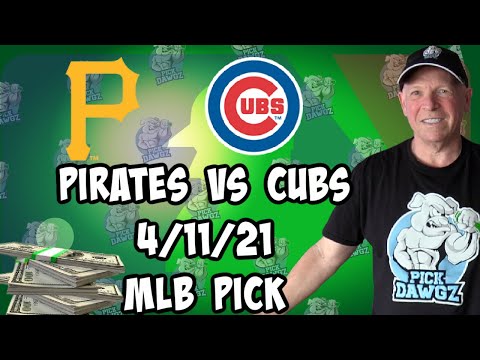