The San Diego Padres will face the Texas Rangers in an interleague matchup this Saturday. It will be the second game of a three-game set.

The Padres took the first game 3-0 thanks to Joe Musgrove’s 10 strikeout no-hitter. It was the first no-hitter in Padres history. The only baserunner reached after getting hit by a pitch, his lone mistake of the game. From the dish the Padres had 8 hits and were 1-8 with runners in scoring position. To start the season the Padres have a .251 team batting average, with 7 home runs. Eric Hosmer leads the team with a .346 batting average, 2 home runs and 7 RBI.

Starting for the Padres will be young righty Chris Paddack. In his first start he went 4 innings, allowing 3 runs (2 earned) on 4 hits with 3 strikeouts. He has faced 5 current Rangers in his career, and they have gone a combined 3-10 against him.

The Rangers had a forgettable night on Friday, getting no-hit for the fourth time in franchise history. The bullpen was the lone bright spot in the game. They pitched a combined 5 shutout innings, allowing just 3 hits with 8 strikeouts. To start the season, Texas has a .231 team batting average with 8 home runs. Jose Trevino leads the team with a .350 batting average. Nate Lowe leads the team with 3 home runs and 14 RBI.

Texas will start righty Jordan Lyles on Saturday. In his first start he went 5.2 innings, allowing 2 runs on 5 hits with 8 strikeouts. He has been hit hard when facing this Padres lineup in his career. In 56 at bats he has allowed a .411 batting average and 2 home runs.

The Padres have not been as explosive from the plate as people had expected with the offseason they have had, but they have been effective, nonetheless. In this one they will face Jordan Lyles, who was roughed up in his lone outing against them last year. It won't be a bargain but the Padres are getting decent value as the far superior team. Give me San Diego to win. 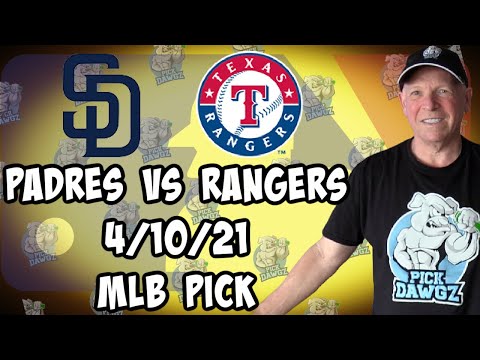