The Philadelphia Phillies face the Atlanta Braves on Saturday, April 10th at Truist Park for game two of a three-game series.

The Atlanta Braves got their revenge on Zack Wheeler and the Philadelphia Phillies on Friday night, taking down the division leaders by the final score of 8-1 in the Braves home opener. The Braves trailed early on in the game 1-0, but that deficit did not last too long. The Braves scored three runs in the fifth, three runs in the sixth, and two runs in the eighth in what was their most complete offensive performance this season. The Phillies only had six hits in the loss and had some troubles in the field as well. The Phillies remain in first place in the NL East standings at 5-2 on the year, while the Braves improved to 3-4 with the win.

The Philadelphia Phillies are projected to bring right-hander Zach Eflin to the mound to face the Braves on Saturday. Eflin did well in his season debut against these Braves on April 4th, as he allowed only one earned run through 7.0 strong innings while striking out eight batters in a 2-1 Phillies win. Eflin will look to replicate his strong start against the Braves the second time around, but this time on the road.

The Atlanta Braves are projected to send right-hander Ian Anderson to the mound to face the Phillies. Anderson will be facing Eflin and the Phillies for the second time this season, and he also had a strong start in his season debut. Anderson allowed one earned run in 5.0 innings while striking out seven batters in the 2-1 loss.

I think the line tells you all that you need to know, as I like the Braves to earn their second win of this series in the name of revenge. I trust the youngster Anderson a lot more than I do Eflin, and I also like the Braves lineup at home in this spot. I will take the Atlanta Braves on the money line here. 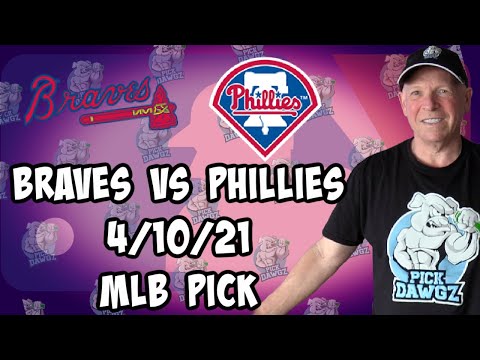