The Houston Astros will host the Oakland Athletics in an AL West matchup this Saturday. It will be the rubber game of a three-game set.

The A’s beat the Astros for the first time in 6 games this season on Friday night. They took the game 6-2 due in large part to an excellent outing from starter Sean Manaea. He pitched 6 innings, allowing 1 run on 6 hits with 4 strikeouts. From the dish the A’s had 7 hits and were 2-4 with runners in scoring position. Jed Lowrie, Mark Canha, and Matt Olson all homered in the game. To start the season, Oakland has a .175 team batting average with 6 home runs through nine games.

Starting for the Athletics will be righty Frankie Montas. Last time out he was rocked by the Dodgers, going just 2.2 innings, allowing 7 runs on 7 hits. Against this Astros lineup in his career, he has allowed a .213 average with 2 home runs in 104 at bats.

The Astros bullpen was responsible for this loss, wasting a solid performance from Lance McCullers Jr. They allowed 5 runs in 4 innings, with 2 home runs. From the plate they had 8 hits but were 0-9 with runners in scoring position. Their 2-4 hitters were a combined 0-13. To start the season the Astros have a .282 team batting average, with 15 home runs. Kyle Tucker leads the team with 3 home runs and 10 RBI.

Jose Urquidy will get the start for the Astros on Saturday. In his first start, he faced this Oakland team and went 4.1 innings, allowing 2 runs on 4 hits. All-time against this A’s lineup he has allowed a .119 batting average with 1 home run in 36 at bats.

Oakland took the last game late thanks to an uncharacteristically bad performance from Houston’s bullpen. The Astros could not convert with men on in the game, but were still getting on base. Montas looked bad in his first start, and the Astros touched him up for 5 runs in 3.2 innings back in October. Good value for the home team here. Give me the Astros to win. 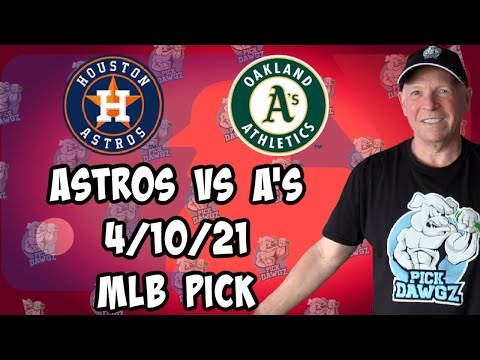